The Freak Accident That Cost Me A Finger 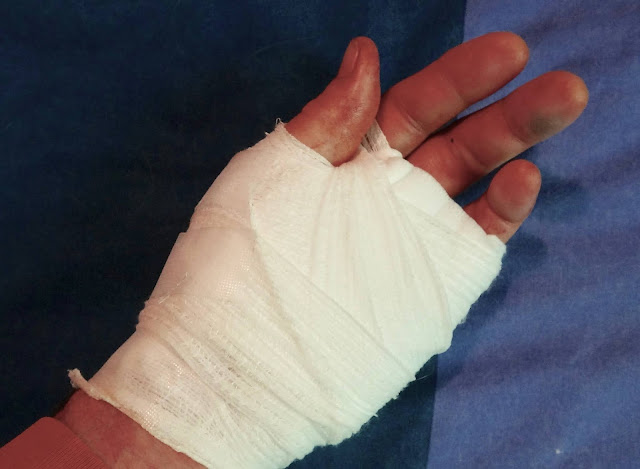 Remember our waterline that had ceased to  work because of the pile of debris that prevented any water from getting into our intake?   At the time I took the photo, the waterfall was running too violently for us to get out there at clear the debris off of the culvert, beside the torrents of water, every so often the falls threw out rocks that came shooting down from above.
Well, a few days later the falls had slowed somewhat, so Glen and I hiked up to see if we could get our water going again.  I didn’t see any flying rocks, so we harnessed up and secured ourselves to a nearby tree.  We carefully got ourselves out on top of the culvert and began to push boulders and pry pieces of logs off the edge.  I was working with a shovel, when suddenly a big rock (I think) bulleted against my outstretched left forearm, turning me, and forcing me to me knees.  I yelled at Glen over the roar of the water that I think I broke my arm.
I got back on my feet and worked my way over to the bank beside the falls and laid down.  Glen followed and I told him again I thought I had broken my arm.  He made me comfortable, then headed off to seek help.  I lay there on the sloping ground with spray from the falls sprinkling down on me.  I started to feel faint and was going into shock, so I tried to position myself with my head low and elevated my legs, propped my feet on the tree, so that I wouldn’t pass out.
After being in the spray awhile I started to get hypothermia and began to shiver.  Glen returned and put his jacket around me.  As I lay there I noticed the reddish and beige glove on my left hand.  There was a small frayed and jumbled mass in top of the ring finger.  I assumed the glove must have been grazed by the rock, but then I realized that the small jumbled mass I was seeing was not my glove, but my finger.  I realized I was going to lose my finger and cursed at the thought of not being able to chord my guitar and mandolin
Finally Search and Rescue arrived and they began trying to figure out how to get me away from the falls and down to an ambulance.   The area beside the falls was too narrow and dangerous for carrying me on a stretcher, and I was feeling strong enough to walk, so that’s what I did, with one of them steadying me from the front and the other from behind.
When I got to the ambulance, I was bundled up and strapped onto a gurney for the ride to the McBride hospital, where I was examined and X-rayed.   Surprisingly, my forearm that I thought I was broken was alright, but my finger wasn’t.  When I was alone with my wife and tried to communicate about my guitar and mandolin playing, I broke down.
I was so impressed with the professionalism and competence all of the local medical, ambulance, and search and rescue staff that had helped me.
I was then ambulanced for two and a half hours up to the Prince George Hospital, and was put in the Day Surgery Room with numerous others, all waiting for operations. The room slowly emptied out until I was the only one left.   It was about 8:00 PM when my turn came.  It was easy, I was put to sleep and woke up with no pain and one less finger on my left hand.
I am back home again.  I figure I will still be able to play the mandolin since most of the chords just use two fingers anyway.  The guitar will be trickier and I won’t be able to do a lot of the Chuck Berry licks I loved doing, but had that rock hit my head instead of my hand, I wouldn’t be here at all.

You can still see my photo-realistic paintings at:  davidmarchant2.ca
Posted by Life in BC's Robson Valley at 09:45