At Least I Got A Corn Story 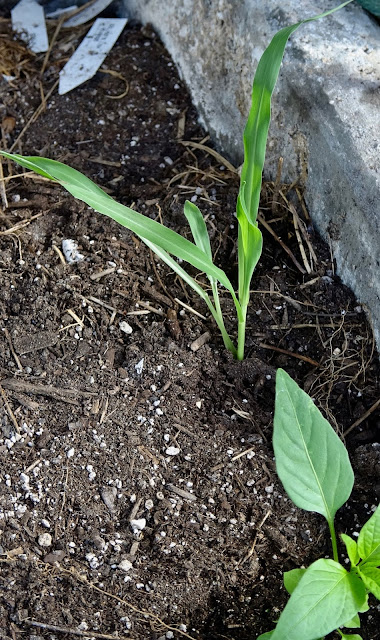 I grew up in rural Southern Indiana, so corn is part of my heritage.  That being the case, I plant corn every year in the garden, even though the Interior of British Columbia is not prime corn growing country.
This year our spring was very late in coming.  Unlike most gardeners around here, who start their corn in the house then transplant it outside, I generally plant my corn directly in the garden, but with the lingering cold weather, I didn’t dare plant outside, so I too planted my corn kernels in a flat in the shelter of my greenhouse.
I watched the flat for the corn sprouts, and watered it every other day or so in order for the kernels to germinate.  I watched and watered, watered and watched, but nothing happened.  A week went by, then another, still nothing happened.  I poked my finger in the soil to see if I could determine why the kernels didn’t sprout.  I was surprised, because I couldn’t find any.
I gave up, bought another packet of seeds, and planted them in the garden.
A couple of weeks passed then something curious happened:  corn started sprouting in my pepper bed (photo above) and the tomato bed in the greenhouse.  What was going on??
I can only surmise that mice must have smelled the corn kernels I had planted in the flat, dug them up, ate most, and then buried the rest to eat later.
Meanwhile, the corn I planted outside has struggled to grow in the extremely wet and cool weather we have been getting.  As you can see in the photo below, not exactly “Knee high from by the forth of July,”  it’s just a bit above ankle high.
My corn crop will be a write-off this year, but at least I got a story out of my efforts. 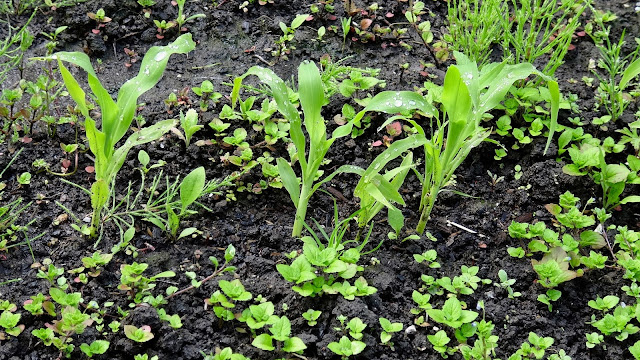