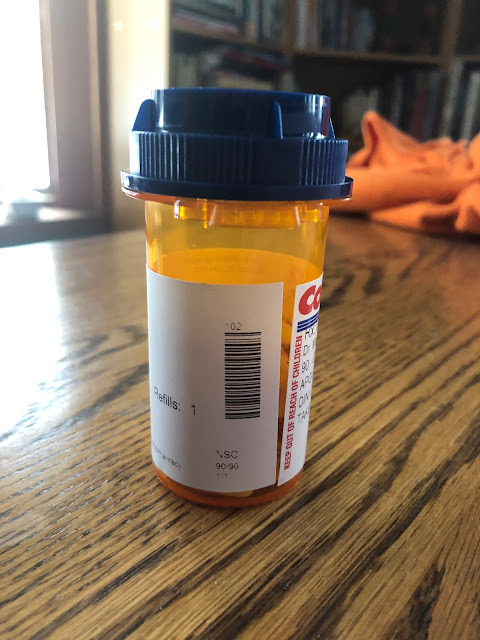 Generally I think I am fairly healthy (and as the doctors always add:  “For your age.”   That being said,  my blood pressure is somewhat elevated.  For the high blood pressure I have for years been taking medicine; Chlorthalidone and Ramipril to lower my blood pressure.  They seemed to work well.

Years ago I got gout and painfully limped around for a couple of weeks because of my throbbing big toe.  I was very confused as to why I suddenly got gout.  I always thought of gout as being caused by a diet of red meat and alcohol, neither of which I consume.  The gout eventually went away, but reoccured a couple of years later.

As readers of this blog might remember, I recently found myself in the hospital with a case of Pancreatitis.  Again I was mystified as to what caused it.  The doctors really couldn’t give me a reason.  It seemed like alcohol is one of Pancreatitis’s main causes, which I don’t use.

The other day I was doing a bit of research on those two drugs I took for my blood pressure and came across some probable reasons for my episodes of gout and pancreatitis.  It seems that Chlorthalidone can cause gout, and Ramipril, in some cases can cause pancreatitis.

I was happy to finally find some reason for those ailments happening.  I have yet to ask my doctor about these findings, and see if there are some other medicines that will serve me better.

Posted by Life in BC's Robson Valley at 10:31 No comments:

There's a Valley, with a Village... 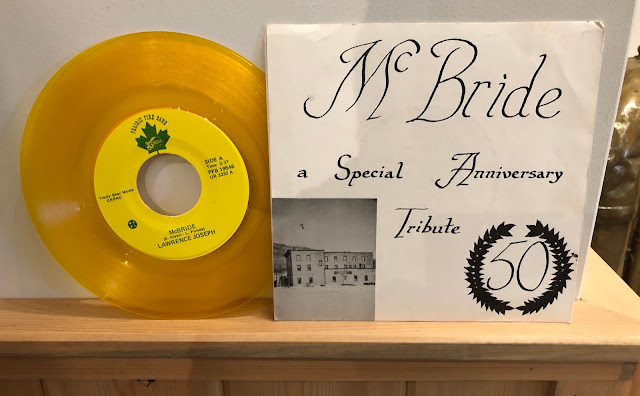 The McBride Museum is currently having a show about local music.  The museum has a lot of old musical instruments and its walls are full of old photos showing people from the past playing music.  When I first heard about the show, I wondered if there was anything I could contribute, and I remembered an old 45 RPM record I had bought in the 1980’s that featured a song called “McBride”.  The old record had been in the attic of my shop for decades and amazingly, I found it and took it to the museum.

The song “McBride” celebrated the 50th Anniversary of McBride being officially recognized at a Village.  It was written by a woman whose last name was Kavari, who was a neighbor.  She asked me if she could use a picture I had drawn of McBride’s train station, for the back of the record envelope.  I don’t know the singer, but his name was Lawrence Joseph.

The record was in excellent shape (I guess I never played it very much) and I was able to convert the song to a .mp3 file and with the help of some of our jam members, we were able to figure out the lyrics and now can play the song at our jam.

Posted by Life in BC's Robson Valley at 10:49 No comments: 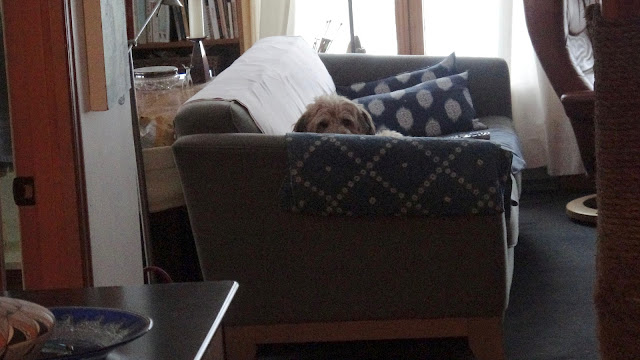 Pets watch and monitor their owners constantly.  That enables them to anticipate what their owners are about to do.  Kona especially likes to keep an eye on us when we are doing something in the kitchen.  That is what she is doing in the photo, watching us and calculating whether what she is seeing will result in any food or snacks for her.
See my paintings at:  davidmarchant2.ca
Posted by Life in BC's Robson Valley at 09:41 No comments:

What are the Chances? 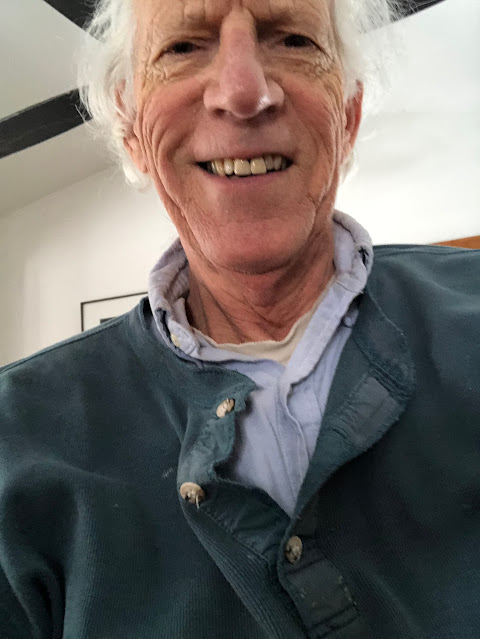 As I age, my fingers have gotten a lot less agile than they once were.  Now I often have difficulties buttoning some of my clothes.  That makes what happened to me yesterday seem particularly remarkable.

I was wearing the greenish-blue pullover you can see in the photo above.  As I started to take it off, it unexpectedly got all tangled and stuck, and I couldn’t figure out why, but I couldn’t get it off no matter how I struggled.  I calmed myself down and slowly investigated why I couldn’t get the pullover, pulled over my head.  Then finally I discovered the problem.

Below is a photo I took when the two garments were still buttoned together. 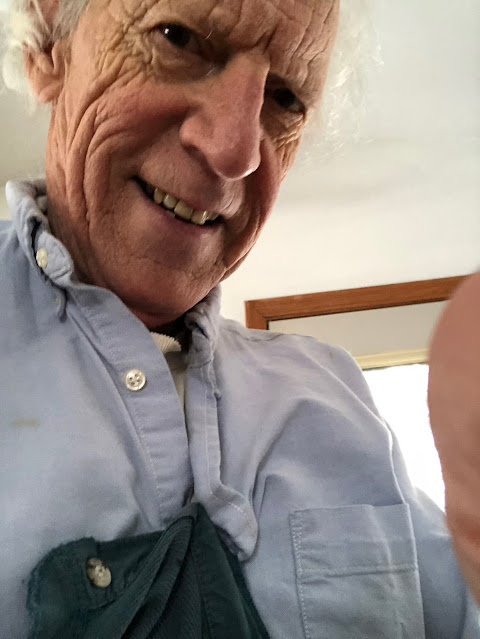 Take a look at my paintings:  davidmarchant2.ca
Posted by Life in BC's Robson Valley at 10:05 1 comment: We keep a constant flow in our gravity feed water system all winter long so that it doesn’t freeze up.  The flow drains into my pond and where it enters the flow keeps a small area on the pond’s surface from freezing.    I suspect the ice on the rest of the pond is at least 8 inches thick.  Around the unfrozen area, frost has formed during our -24°C (-11°F) cold snap.

Surprisingly, two different distinct types of frost formed; one very feathery and fluffy looking while the other, more like white blades of grass.  I guess something was subtly different in the two areas.

Posted by Life in BC's Robson Valley at 09:34 No comments: 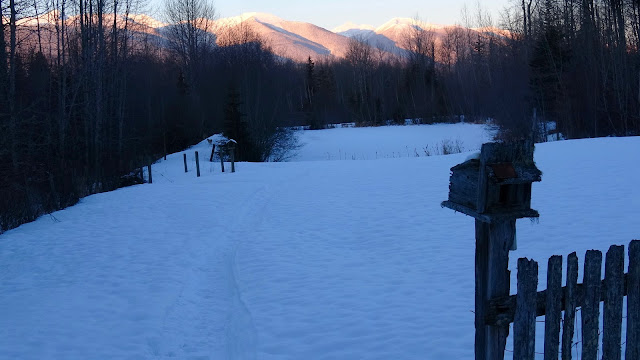 We have had it easy for most of January with mild temperatures hovering around the freezing point, however now winter has returned.  This morning the skies were clear and the temperature was -24°C (-11°F).

I am not a fan of frigid weather, so I was happy to see that last night was supposed to be the coldest of this particular cold snap.  The temperatures are supposed to slowly warm and return to a more normal (and reasonable) range.

If you look really carefully at the photo, you can see Kona in the distance on the left, looking back at me and wondering why I have stopped.

Posted by Life in BC's Robson Valley at 10:03 No comments:

Back Where I Belong 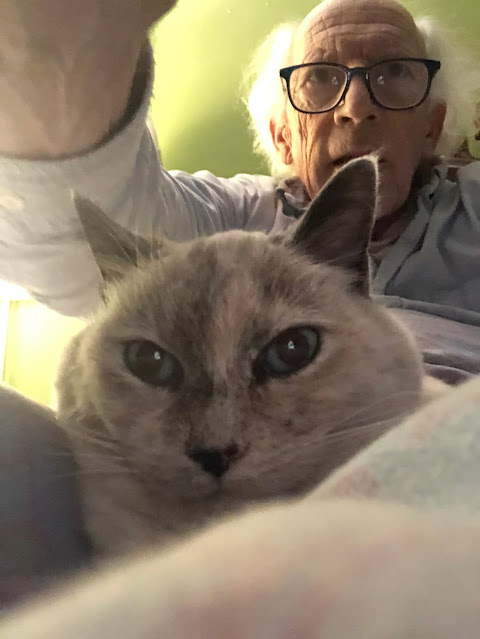 In the winter, Lucifer our cat, stays inside the house pretty much all of the time.  However at 9:00 at night when I take Kona out for her last walk, Lucifer often comes out too and watches us.  After the walk, Kona comes inside, I call Lucifer, then she also comes inside.

The other night things didn’t really work out that way.  I walked Kona and we came inside the house, but I didn’t see Lucifer outside so assumed she stayed in the house, like she sometimes does.  I locked the door and we went to bed.

The next morning when I was eating my breakfast, I heard a miserable, pleading, “meow” from outside the house.  I opened the front door and Lucifer sprinted into the house.  It seems as though she ended up spending the night outside.  Fortunately, it was not a really cold night, the temperature was just around freezing.

I was sorry for locking her out overnight, and she was too.  The photo shows Lucifer up in the bed, happy to be back in the familiar, warm, surroundings.