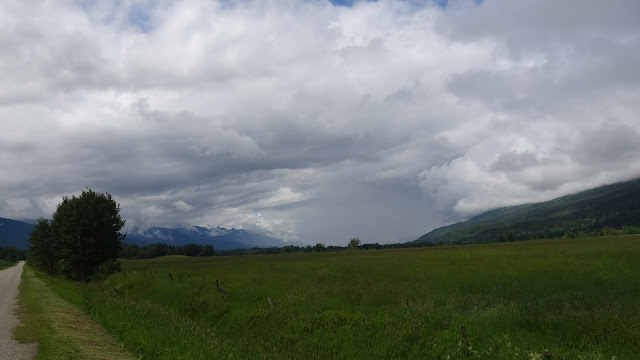 Every time I make a prediction I am proven wrong.  I am hoping that is the case for the one above.
Tuesday night is our jam night.  Covid-19 has forced us to play outside on the porch of the McBride train station.  On a normal summer, that would be alright and even pleasant venue, but like everything else this year, things haven’t turned out that way.
The Robson Valley seems to be stuck in a continuing weather pattern that gives us nothing but showers and rain, making it difficult for us to play on the porch.  That was the case last night.
An hour before we were set to start, I noticed that our area was under a severe storm warning with possible strong winds, hail, and heavy rain, and as I drove into McBride I saw rain falling on the mountains just west of town.
I was the first one at the station, so I just sat on the bench in the strong gusts of wind, waiting to see if any one else would show up.  Our steel guitar player arrived, so we both just sat and talked about the mudslide as the showers began.
It was raining harder when our electric guitar drove in from Dunster, making three of us talking on the porch.  Our washtub bass player arrived in his car but didn’t get out, he just talked through the falling rain, then drove off, but as the showers were beginning to slacken, our fiddle player arrived.
Having four musicians gave us a critical mass, so we all opened our cases and got our instruments out.  (I was going to give my mandolin it’s first jam tryout since I lost my finger.)
We had gotten through a few songs when our electric bass arrived and joined the group.  We continued playing until 8:00.
During that last hour, the showers had ceased, the sky began getting lighter, and the winds had stopped.  The lack of wind created another problem--mosquitoes.  It is hard to slap a mosquito away when both hands are busy playing an instrument.  We all tolerated the mosquitoes for a long time, but eventually their increasing numbers made quitting and packing up a viable option.  It’s too bad about all of the mosquitoes, had they not been present I am sure we would have continued playing for another half an hour.
It seems that no matter what the forecasts predict in advance, by the time Tuesday arrives precipitation is falling from the skies, and now the mosquito explosion has just compounded our difficulties. Fortunately, we are a music-hungry group of players who are determined to practice our craft, so no matter what obstacles are thrown before us, I think we will persist.