McBride And The Ancient City of Paestum by Gary McCullough 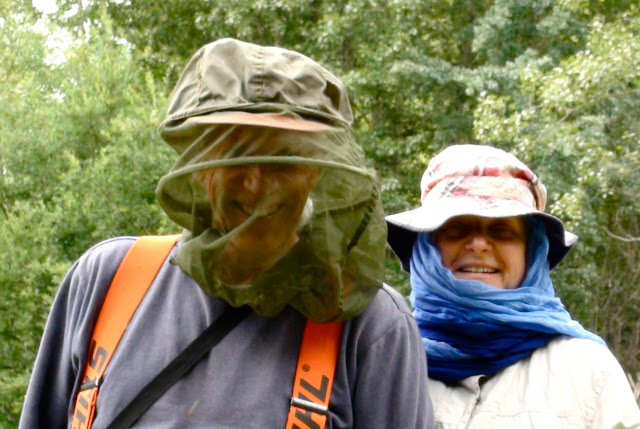 Lately I have been corresponding with Gary McCullough, an old university friend.  I suspect I must have been complaining too much about our current mosquito infestation because he  did some research, and sent me this interesting historical account of the city of Paestum.  I’m not sure it made me feel any better, but I think he was trying to give me encouragement to bolster my resolve in dealing with the pests.   He is my guest blogger today.

Why The Residents Of McBride, BC, Are More Heroic Than The Greeks And Romans
Whom We So Admire
by
Gary W McCullough

I was reading an article concerning the different life-styles and the competition for the tourist trade between the west coast Italian cities of Naples and Salerno.  I didn't know this -- and you may not care to know this -- but Naples is a lively, up-to-date city whereas Salerno's charm lies in its being comparatively quaint and quiet.  There are sites to see in and around both locations.  Naples, of course, is about five miles from Pompei.  ('Nough said, huh.)  But Salerno has its sites as well.
A handful of miles southeast along the coast from Salerno is Paestum.  (Say, PEST-um.)  Paestum was a city that was built by the Greeks when the Greeks were at the top of their power and influence.  The Greeks erected temples and edifices there: it was a mini-Mt Olympus.  As the centuries and the power of the Greeks waned, the Romans became the power that possesses Paestum ... and, amazing to you and me, the Greeks didn't seem to mind.  The Romans admired the Greeks; they loved the monuments the Greeks had built.  But, alas and in time, the Romans couldn't stay there.  The place was unbearable.  The Romans had once conquered the known world, but they couldn't handle Paestum.
The Greeks and then the Romans, in their effort to bring fresh water to Paestum, had created mires, marshes and swamps, and those mires, marshes and swamps became breeding grounds for mosquitoes.  The Greeks bailed in the 200's BC, and the Romans started running for cover in the 500's AD.  Neither empire could stand being bled alive my the mosquitoes.
Listen:  Paestum contains the three best-preserved Greek temples in the world.  They are in far better shape than anything on Mt Olympus.  Why are they in such good shape?, you ask.  Because the mosquitoes were so bad that no one went near the place; the ruins were over-grown; and they were saved for a few millennia.  Go ahead, look it up.  P-A-E-S-T-U-M.  Try "Paestum mosquitoes" on Google.
The Greeks and Romans wouldn't have lasted a week in McBride.  Remember that, fellow citizens.


Visit davidmarchant2.ca to view my photo-realistic paintings.
Posted by Life in BC's Robson Valley at 10:09