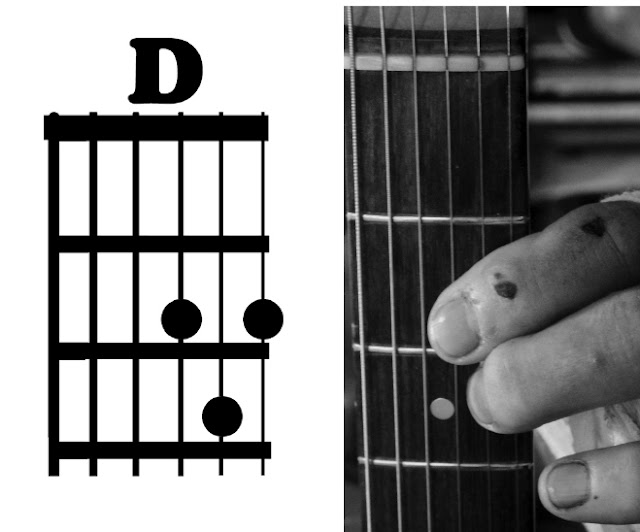 The first thought I had after realizing that I was going to lose the ring finger of my left hand was, “How am I going to play guitar?”  Immediately, I started visualizing guitar chords to figure out which ones I might be able to play and which ones definitely required the use of my ring finger.  One of the first chords I thought about was “D”, an easy chord.
Playing D requires the first three fingers of your left hand, pressing down three strings.  The chord forms a triangular shape with the first two fingers pressing down two strings on the second fret, and the third pressing down the second string on the third fret.
Even though my hand is still bandaged, I couldn’t help but see if I could play a D, using what fingers I now have, and fortunately I can.  I can press down the strings on the second fret using just one finger, and use my second finger to hold down the string on the third fret.  It is still awkward with my fingers still stiff and bandaged, but seeing that I can play D has given me hope.
Many people upon hearing about my finger loss, have told me about Djanglo Reinhardt  and Jerry Garcia, both virtuoso guitar players with missing digits, in an attempt to encourage me, but playing music is so important to me, I don’t really require encouragement.  I am determined to figure out how to keep playing.
Tuesday night is our jam night, and although I can’t yet play, I went just to sing.  We now meet on the porch of the McBride train station.  All of the rainy weather we have been getting has been a deterrent to the jam happening, and it was showering last night, but the station’s covered porch was broad enough to shelter us.   I found it a bit scary to just sing, I am so use to playing at he same time.
Last night at the jam we had a keyboard, a washtub bass, a steel guitar, an electric bass, a fiddle, and an orphan hollow body guitar (the player forgot his amp).  We had a good time, but I am anxious to get playing guitar and mandolin again.

Take a look at my photo-realistic paintings:  davidmarchant2.ca
Posted by Life in BC's Robson Valley at 10:12