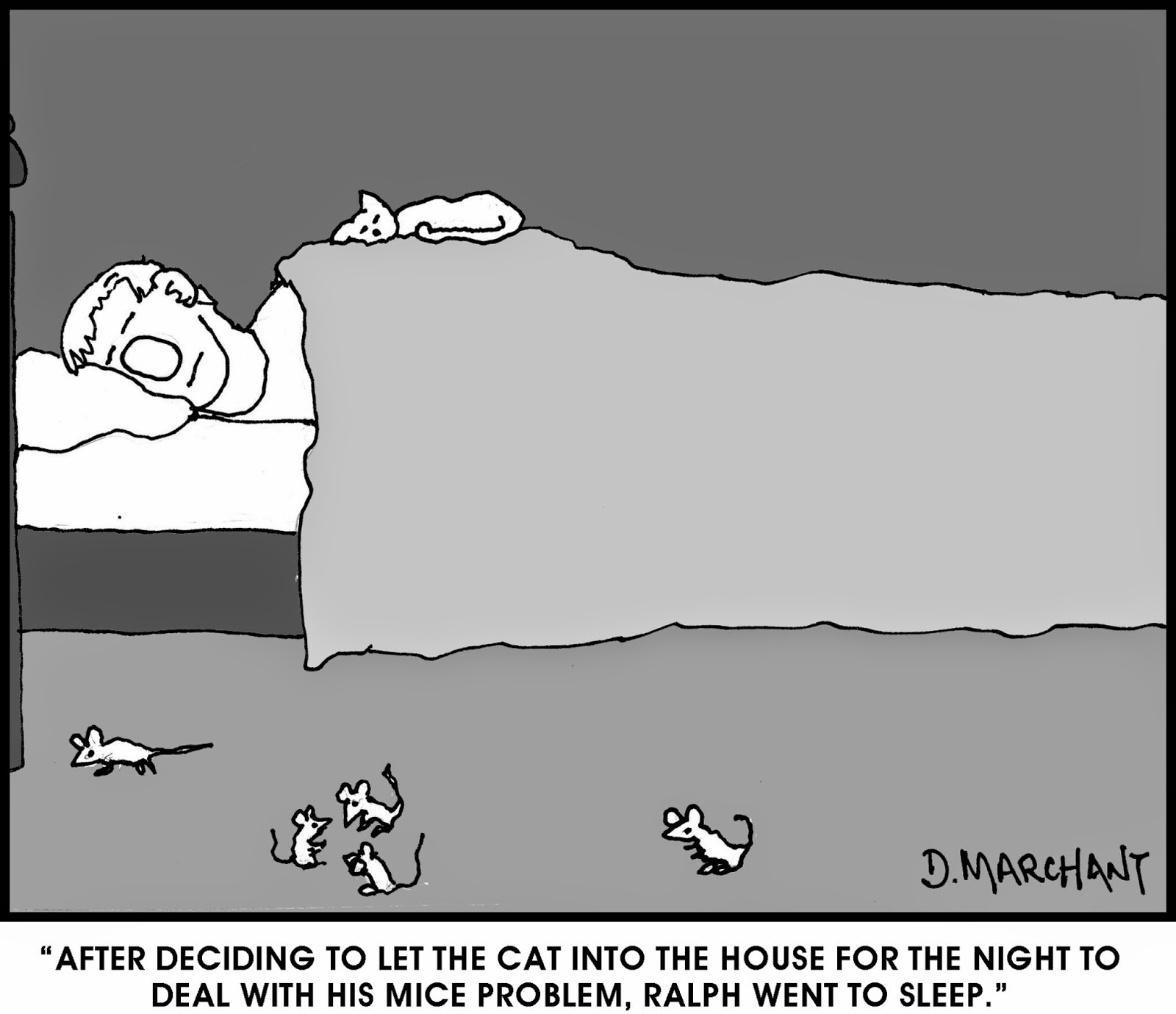 I had a terrible night last night because of the mice.  We have been having a mouse problem in our house since winter.  The mice that have taken up occupancy seem to be smarter than the usual variety and as a result they are still here.
I don’t really like to kill mice if I don’t have too and usually I use live traps to get them, but these have been so persistent that I have gotten out the heavy artillery--kill traps.  Whenever I hear the snap of a trap I think, “Well, that’s one less mouse I have to deal with,”  but usually I find the trap empty and imagine the mice hiding behind something and holding their hands over their mouths as they giggle and watch my surprise and frustration.
Last night it was about 11:00 (23.00) when I fell to sleep.  I was awaken at 12:30 by the sound of scratching on metal.  It was the sound of a mouse in the live trap, scratching away in an attempt to get out.  I shook my head a couple of time to try to shake my way out of the deep sleep that was still in my brain, I carefully got out of bed, not wanting to disturb Lucifer, our cat, who really should have been doing something about the mice problem, instead of sleeping.
I dragged myself to the pantry, where the sound was coming from.  I turned on the pantry light, reached down grabbed the live trap which was now silent, held it up to my eyes and looked through the slots to see if I could see a mouse--I could not.  I assumed I had another mouse escape.  Shaking my head in disgust, I retraced my steps back to the bedroom, again carefully getting back in the bed so I wouldn’t disturb sleeping Lucifer.
Of course I couldn’t go back to sleep, so I set the clock radio to “nap” so it would play for 40 minutes, in which time I would hopefully be back in slumberland.  Unfortunately, the radio program was the same one I had heard that morning (with all the government cutbacks CBC now repeats the same programs about 3 times a week.)
I must have eventually fallen back to sleep, because at 1:30, I was again awakened by the metal scratching sound.  Again, careful not to wake the cat, I got up walked to the pantry, turned on the light, picked up the live trap and peered in.  Again I saw nothing, but my brain was awake enough to have a thought--maybe the mouse is in the trap, but just hiding in the entrance way, where it could not be seen.  I wasn’t going to be fooled again, so I took the trap, opened the door, put on my gum boots, and carried the trap outside to the barn.
The “Super Full Moon” was still high in the sky and so I didn’t need any light to find my way to the barn.  Once in the barn, I turned on the light, lowered the box to the floor and opened the lid.  The mouse remained hiding, but I left the lid open and the live trap on the floor.  I figured the barn was a good place to let the mouse live, since I no longer have anything in there that needs mouse protection.
I walked back to the house, took off my boots, turned off the lights, and carefully got back into bed.  Lucifer remained sleeping.
Again, I turned on the clock radio to nap, and listened to some show from Germany about kids playing music or something, I don’t really remember.  Fortunately, I did eventually fall back to sleep.  Unfortunately, at 3:15 I was again awakened by the sound of mouse scratching metal in a live trap.
Shaking my head in disbelief, I got back up, went to the kitchen, and located the sound coming from the live trap under the cutting board table.  This time when I picked up the trap and looked through the slots I saw the mouse.  I put on my gum boots, and once again made a trip out to the barn so that this new mouse could join his buddy in a new life there.  This mouse was more energetic, and as soon as I opened the lid of the trap, it leaped out and was gone.
Back to bed, the radio, and finally sleep.  I was a horrible night, but at least there are two less mice in the house, and our cat Lucifer had a restful and peaceful night of sleep.