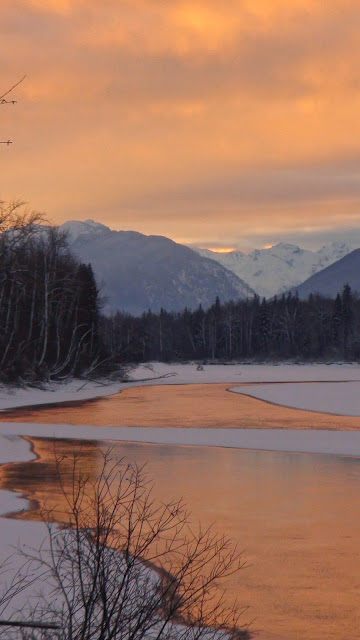 The last day of the year is usually the day to reflect on all of those things, both positive and negative, that happened.  For me the negative memories outweighed the good ones in 2012, but 2013 was a good one for me.  There were a few negatives; we went weeks without a toilet, and it seemed that we would never find a new one that would fit or work.  We had to give up on having chickens when it became clear that if we continued, a weasel would end up killing them all, but those episodes, though frustrating, were minor in comparison with the real tragedies experienced by others.
Being a real weather oriented person, I had to be impressed at how good the weather was for us in 2013.  We had lots of warmth and sun, and got rain at all the right times for us to have a really bountiful garden.  There were very few mosquitoes, and a beautiful and mild fall.
2013 was the year I discovered that there were pine martens living close to us, and woke up one morning to find one in my bedroom.  It was the year a Subway restaurant truck wrecked close to McBride and we ended up with rolls of frozen dough for making buns (we still have a big bag in our freezer, since I keep forgetting to make buns).
Our cat Lucifer discovered the delights of watching TV and following the cursor on my computer screen.  She also learned to curl up to snooze in the cardboard box beside the computer instead of standing in front of the monitor.
I started playing music again in 2013.  I initiated a weekly jam session at the library, and as a result gained a lot of new musical friends and learned a lot of new songs.  The mandolin became my main instrument forcing me to learn a lot of new chords and I got a new amplifier for my electric guitar for when I want to play rock and roll.  Joan and I had to re-awaken a lot of old brain cells by starting to square dance again.
I stopped two life-long habits.  Water became my drink of choice, thus stopping the habit of drinking Coca Cola or other soft drinks.  I also mysteriously stopped chewing on my fingernails, something I had done all of my life.  I whacked off the pony tail I had for 20 years.
I think the the most positive thing that happened in 2013 was getting a dog again.  We spent 8 hours of nerve-wracking driving on icy highways to get Skye from an animal shelter down in Chilliwack.  It feels like our little family is complete again.
If you have been following my blog, you already know most of these things, but I felt obligated to follow the lead of all the TV and radio news programs and review the year.  I hope 2013 had been a good one for you too, and that 2014 will a be a really good year for everyone.