I've Been Working on the Driveway 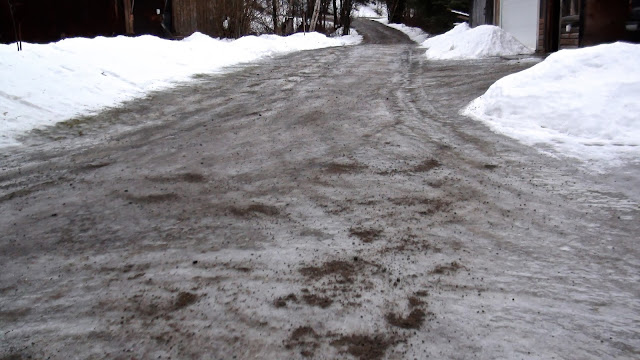 My driveway is about 60 meters long.  During the summer my outdoor work activities are spread all around, I work in the garden, mow the lawn, and do odd jobs on the out buildings, but in the winter, just about 95% of my outside work is done on the driveway.  It is, after all, our link to the outside world, so it has to be kept clear.
Most of my winter work consists of shoveling snow off of the drive.  If we get a light snow, say 3 inches (7.6 cm), I could easily drive over it, but I like to clear the driveway anyway; you never know how much snow might be coming overnight, and it is a lot easier and quicker to shovel a light blanket of snow than a really thick one.  Also, if you continually drive over each new snowfall, it builds up into high ridges that become difficult to drive on, and it takes forever to melt when spring comes.
I have had a lot of opportunities to shovel the driveway this year.  Even though I keep it clear, some snow always stays on the drive and when it is driven over it turns into “hard pack”, (compacted  snow) and roughly the same thing as ice.  A lot of roads and driveways in this country are a lot smoother to drive on in the winter with the hard pack than they are on the summer, with mud, ruts, and holes.
After the past couple of days of above freezing temperatures +4C (39F) and rain, the hard pack on my drive turned to glare ice.  Because my driveway slopes up to the road, it would have been near impossible to get up the driveway, so some action was called for.
This condition happens at some point every winter, and what I generally do is take ashes from our wood stove and spread that across the ice.  It “pocks” the slick surface of the ice and gives tires (and boots) some traction.  That is how I began this morning.
I took the ash bucket and as I carefully walked up the incredibly slippery drive, I threw handfuls of ashes in front of me, giving me some footing.  Unfortunately the one bucket of ashes I had didn’t get me very far up the drive, so when the bucket was empty I had to come up with some other solution, and luckily I had one.
Last summer I got a load of sandy gravel to fill some of the low spots on the driveway.  I hadn’t used it all and had a pile of it left by the barn.  The problem was that it had been sitting all winter, so it was covered with about 10 inches (25cm) of snow, and when I had cleared a small section of snow  away, I was not surprised to find that the surface of the pile was frozen as hard as concrete.
After banging around at it with the shovel, I was able to break through the icy crust of the sandpile and found loose sand underneath.  Then it was just a matter of tunneling or mining the loose gravel from inside the middle of the pile.
I was able to get 5 bucketfuls of sandy gravel out of the pile, which gave me enough to spread the entire length of the driveway.  Although I haven’t tried driving it yet, I am fairly confident we now again have access to the outside world. 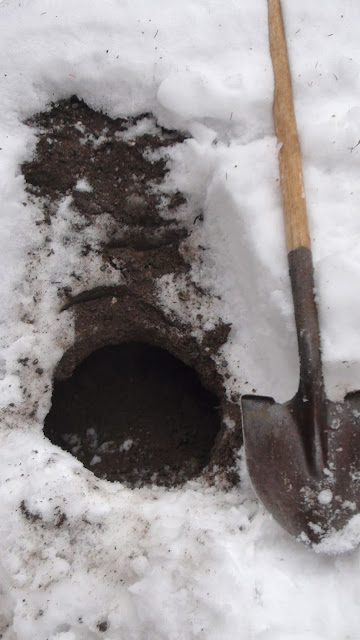