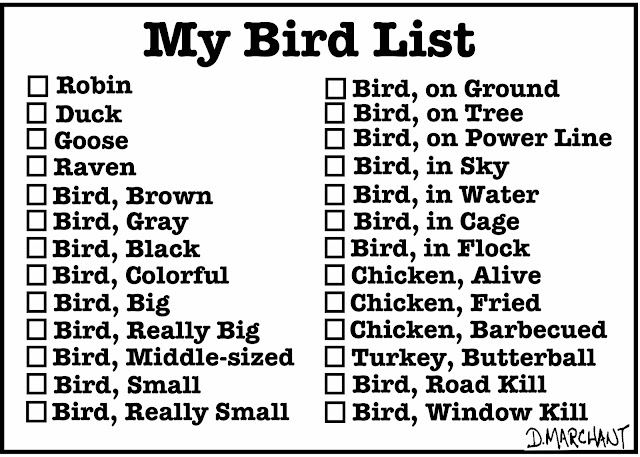 This time of year a lot of communities in North America join in and do a Christmas Bird Count.  Birders and nature oriented individuals keep track of the birds they see during the day, then report the results, so that scientists can see trends in the bird populations at the various locations over the years.  Yesterday, McBride had its bird count, and like in years past I volunteered to keep track of the birds that hang around our place and come to the bird feeder.
I must confess that I am not as dedicated as those people who get up early, drive to some remote area, and spend the day with binoculars hanging around their necks, watching and listening for birds.  I always feel pretty intimidated by those hardcore birders.  I envy their abilities of observation and hearing, but my brain just seems to lack some of those key parts that they are able to use.
I can look at a bird, and make mental notes of what I am seeing:  “it is grayish, it has sort of stripes, is kind of a middle size, it has a sharp, thin, beak.”
I am sure I will remember those characteristics as the bird flies away and I reach for my bird book.  Then as I am confronted with the myriad of drawings of birds from the book, and no matter how long I look at the pictures, I end up realizing that I haven’t a clue of which bird it was that I saw.
The same scenario plays out with bird calls.  Some people can hear an almost inaudible snippet of sound coming from the forest and say, “Oh, a brown creeper.”
Unless it’s a raven, a woodpecker, or some other really common bird, I usually can’t distinguish between bird calls; they all sound so much alike to me.  Birding is really something I don’t seem to have much ability for.
Above, you see a cartoon I did many years ago.  It is a list particularly designed for the want-a-be birder, who has the same abilities of observation that I possess.  It has been created to give you some feeling of success, so that you don’t go away frustrated.
As far as yesterday’s bird count, it was probably one of the poorest years I can recall.  I used to have a much wider variety of birds around our place.  Many of the species that I had seen for years seem to no longer be around.  I don’t really know why, not much has really changed in the neighborhood environment, and those are birds that don’t migrate, they spend the whole year around here.

I paint every day, in the realism style.  See my paintings:  www.davidmarchant.ca