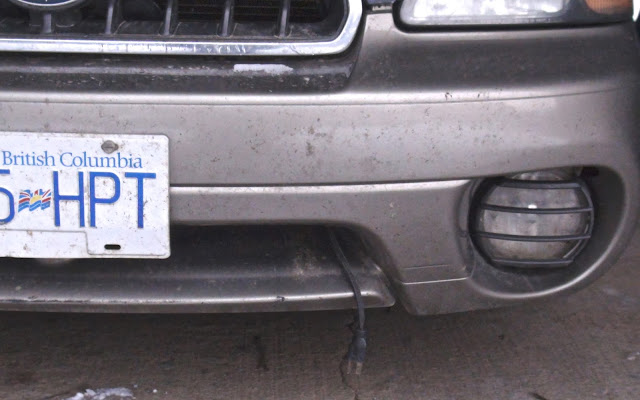 Shortly after moving to Canada back in 1973, I began to notice that most vehicles had an electric plug dangling out of the front.  I had never seen such a thing and was curious as to what they were for.  Vehicles up in the colder climes usually have what are called “block heaters”.  They look like a small version of an electric hot water tank element, if you know what they look like.  If not, then they are just a short thick metal loop that goes inside of the car’s engine.
When they are plugged in they heat the engine’s antifreeze or in some cases the engine’s motor oil, thus warming up the engine.   In very cold conditions when the engine is very cold it turns over very slowly when you are trying to start it, with a block heater warming the engine, it starts up much easier.  Because block heaters are so common up here a lot of motels and businesses have electric outlets in their parking lots to serve their workers or customers.
Some people waste a lot of electricity by plugging in their cars when it gets cold and heating the engine over night or for days, whether they are going anywhere or not.  We usually just plug it in 1-2 hours before we have to leave, and that is enough to warm the engine for an easy start.
It is always fun to hear about cars driving down the street trailing extension cords behind them, because the driver forgot to unplug their car before they left.  We have forgotten a few times, but always heard the “thunk” of the extension cord when it shot out of the wall or the plug in front of the car.
If you see a car or truck from the north with an electrical plug hanging out of its grille, remember its probably just a block heater, not an electric car.

You can see my realistic paintings at:  www.davidmarchant.ca