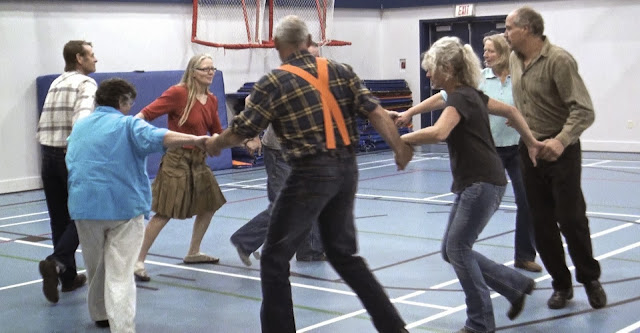 Unfortunately, I didn’t have my camera along last night at square dancing, so I had to drag out a photo I took way back in the middle of October, when square dancing first started.  I found last night’s session quite interesting and that is what I was going to talk about.
Kjell, who was our neighbor for 30 years, once told me after spending time away from McBride that one of the things that he thought was neat was that when he was living elsewhere, all of the people he hung around with were the same age as he was.  When he was living in McBride, he was always with people whose ages spanned a wide range.  That is something I have found to be true also.  I guess because it is such a small community (750 people) that organizations do have a wide range of ages.
One of the big surprises about square dancing was just how many young people have been coming.  Last night the age range was between 15 and 80 (actually the range could be greater, I am only guessing).  Fern and Lloyd, who used to run square dancing back in 1977 came by to see what was going on and actually got out on the floor for a few dances, and new young people keep showing up weekly.  Where we once had enough people for one square (8 dancers) we now have three squares and people sitting out.
Last night in the middle of the session, McBride’s youth hockey team, came in Santa hats and caroled to us.  They were soon grabbed and forced to do a few simple square dances with the group.
Square dancing will now take a break until after the holidays.  I have sure enjoyed getting out and promenading with my partner and allemanding with my corner .  It helps to make the winter pass quickly.

Take a look at my realistic paintings:  www.davidmarchant.ca