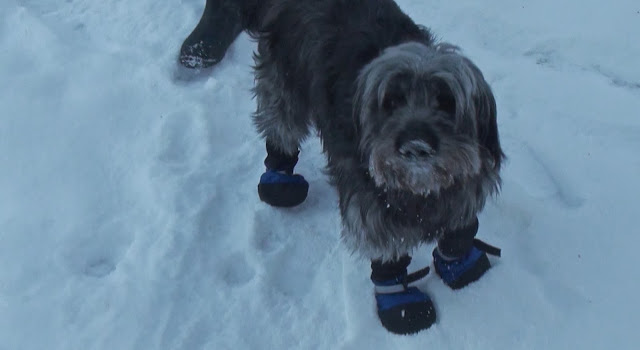 On our first day with Skye, as we were driving her back to McBride, we made a stop along a snowy highway to give her a chance to pee.  We noticed that it didn’t take long for her to start lifting her paws off of the snow, because they were getting cold.  We figured that this was probably her first experience with the white stuff, and that she would adapt over time.  She has adapted quickly, and loves to tear around in the powder when temperatures aren’t to brutal, but like Mac, our previous dog, when it is really cold outside (-10C, 14F) or colder, after a while she starts lifting legs off of the cold surface.
Since it has been cold over the last few days, we knew that she was going to have problems, so we dug out Mac’s old dog boots to see how they would do for Skye.  We knew that they wouldn’t be a great fit for her, since they were too big for Mac and he had bigger feet than Skye.
Even though they were plenty big, it was still a struggle to get all four of them on Skye’s feet.  She, of course didn’t know what we were trying to do, and didn’t cooperate.  Once we got them on her and she tried to walk, she reacted just like Mac did;  she would raise her paws really high, like she was trying to step over them, resulting in more than a prance than a walk.
We headed out on our walk, and it didn’t take long for one of the boots to come off of the back feet.  We didn’t try to put it back on her, since it was hard enough to do in the house, let alone try doing it out in the snow.  We proceeded.
A bit further down the trail, one of her front boots came off.  Joan picked it up, and on we went.  We only got about 1/4 of the way down the trail, when we were all cold enough to turn around and head back to the house.
I imagine we will try the boots on her again, since when they stay on, they do keep her feet warmer, but eventually we will probably have to buy her some that fit.