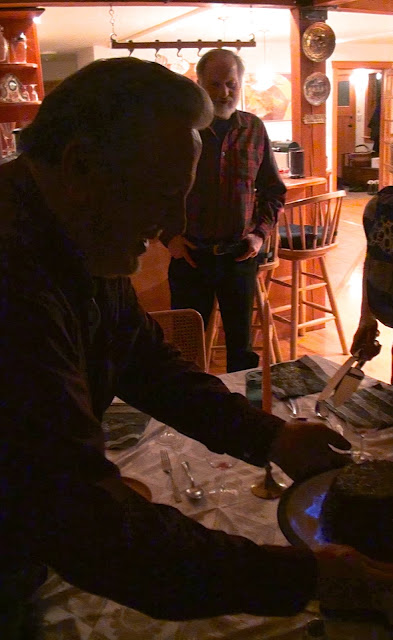 We spent our New Years Eve as we traditionally do by enjoying a good meal and conversations with friends over at Milnes.  The photo above shows Dave presenting his guests with a flaming Christmas pudding, that he and Lyuba made.
Yesterday I blogged about how 2013 had been a good year for me, and the year ended on a really positive note as well.  For last night’s entertainment, we got to see the film, “Searching for Sugar Man”.  It was a film I have been wanting to see ever since I first heard it’s remarkable story a year ago.
The film was one of the most memorable I have ever seen.  I’m not going to spoil the story here because I think that you should seek it out and experience it from the film.  It would have been an amazing story if it were fiction, but it actually happened.  The film won the Oscar for Best Documentary in 2013.
“Searching for Sliver Man,”  watch it, you won’t be disappointed.

I paint every morning, see what I painted today:  www.davidmarchant.ca