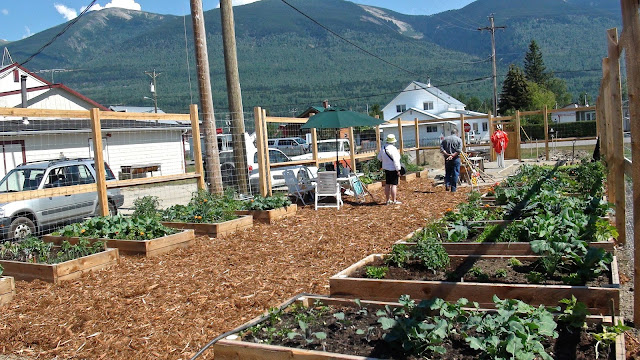 The idea of a municipality having a community garden is not new.  They seem to be popping up all over.  Prince George (the city, not the baby) has had one for several years.    The town of Jasper, Alberta to the east of us, also has had one for a while, but it wasn’t until about a month ago, that the people around McBride were finally able to start planting in their own community garden plots.
The idea had been in the works for a while.  I was a bit surprised when I first heard about the idea; it seemed to me that most everyone in McBride, and the surrounding area, had back yards where they could put in a garden if they wanted one.  I was wrong, as you can see from the photo.  The community garden has made a good start and I suspect that, like the veggies, it will grow.
Certainly the big fence that surrounds it is a big draw to those whose attempts at gardening have been thwarted by hungry deer.  Since we can no longer grow onions in our garden, due to an infection of a fungus in the our soil, I have been thinking that, maybe next year, we might even consider a plot in the new community garden.
It has been well planned and is an attractive asset to McBride.  At the far end of the photo, close to the gate, they are laying patio stones, and creating plots which will be accessible to people in wheel chairs.
I send out praise and congratulations to all those people who worked so hard to bring the McBride Community garden to reality.

If you've got time look at my paintings:  www.davidmarchant.ca