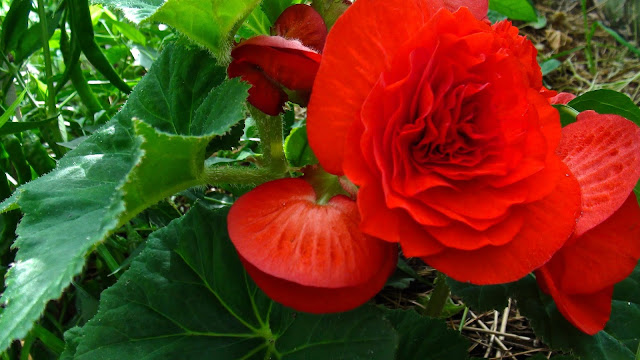 In the autumn when I dig out the potatoes, I also dig out the dahlia and begonia bulbs, so that I can store them under the house during the winter.  That’s what I did last fall.  When spring planting time came around I got the withered tubers out from under the house and planted the dahlias in the ground and Joan took the begonia bulbs and planted them in pots and left them in the greenhouse to sprout.
After a few weeks, a few begonias started to sprout in their pots, but it seemed that we had lost a couple of begonias over the winter, because nothing happened in a couple of pots.  Finally, Joan decided to cut her losses and she emptied the “dead” bulbs and their soil into the raised greenhouse bed where I generally grow my peppers.
A month ago, my pepper plants were growing like crazy and had even started to bend over with all their heavy growth.  As I was looking them over, a splash of deep red caught my eye through the tangle of pepper leaves.  My first reaction was confusion, while the chili’s on the pepper plants were forming, they were still all green, I couldn’t figure out how I could have a bright red one already.
Then I took a closer look and discovered that the red color was not from a chili, but a flower--one of Joan’s “dead” begonia bulbs had decided on life after all, and had grown.  A couple of weeks later, I discovered a second begonia growing in my chili bed.
I decided since it was such a struggle for them to grow in the first place, I wasn’t going to add any more stress in their lives by transplanting them.  Instead I will let them continue to spend the growing season in the greenhouse, so they can generate enough energy in their bulbs so they can make it through the next winter under the house.