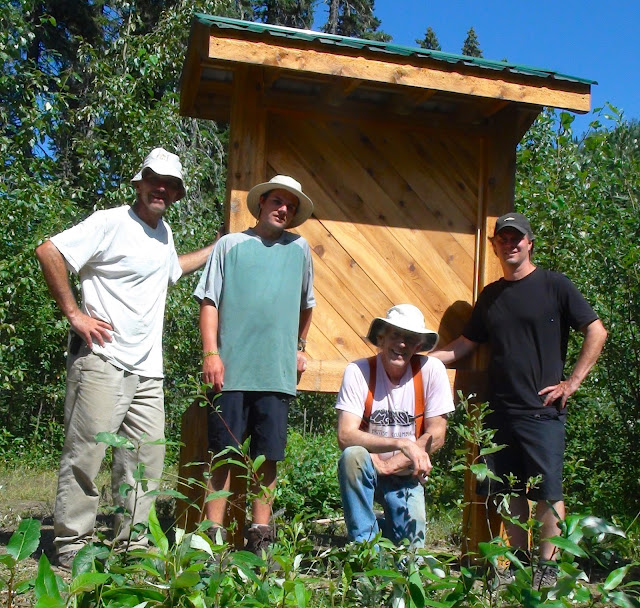 Over the last couple of nights, PBS has been re-running the Ken Burn’s documentary about the National Parks in the US.  It is fascinating how little things have changed.  There were a few individuals who saw the beauty and value of wild places, and who made personal sacrifices struggling against the powerful and rich forestry, mining, and agricultural lobbies to get National Parks established.   It is only because of what they did, that people today can still experience those beautiful and enchanted places.
I thought the timing of the re-broadcasts was interesting, because just a couple of days before, I was in the company of two such environmental campaigners, putting up a sign post at the Goat River.  Those two had spent a good part of their lives struggling and sacrificing in an attempt to save a bit of BC’s natural environment from industrial exploitation, so that future generations might be able experience the same natural environments and wildlife that they loved.  The two are standing on opposite sides of the photo.
Doug Radies is standing on the left in the white T-shirt.  He is now a phys. Ed teacher at an elementary school in a low economic area of Vancouver.  In his younger days, he spent years campaigning and traveling from community to community in an attempt to save the Cariboo Mountains from logging.  One winter as part of his campaign, he skied the length of the Goat River.   All his sacrificing and work resulted in a 130,000 ha. (320,000 acre) area being added to the BC Park system.  This addition created a wildlife corridor which connected Wells Gray and Bowron Lakes Provincial Parks.
The man in black standing on the right is Fin Donnelly.  He is now a MP in Canada’s Parliament; representing New Westminster-Cooquitlam.  In 1995, in an attempt to draw attention to BC’s beleaguered rivers, he swam the 1,440 km (870 mile) length of the Fraser River, starting in the very icy headwaters at Tete Jaune,  east of McBride, and ending up in Vancouver.  He did this twice, and also did marathon swims in lakes and the ocean, to promote critical thought and  community awareness of our water resources.
I have a tremendous respect for both of these guys and their dedication to planet Earth.  It was an honor for me to spend a day with them putting the sign in the ground, working to get the roof, which was flawed, to fit on the posts.  It wasn’t all hard work though, late in the afternoon, we got to refresh ourselves and wash away the heat by taking a cold dip in the frigid Goat River.