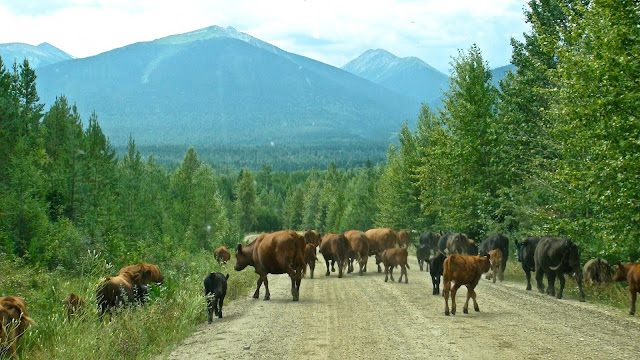 The Robson Valley is a wide valley that cradles the meandering Fraser River and is surrounded on one side by the Cariboo Mountains and on the other by the Park Range of the Canadian Rockies.  Each of these mountain ranges are divided  by numerous rivers and creeks that drain the runoff from glaciers and rainfall.  Old logging roads were built up most of these drainages which allow the curious to drive up them and explore the back country.
Every time I start drive up one of these bumpy roads I have my eyes peeled, hoping to get a glimpse of a bear, a moose, or some other exotic form of wildlife.   During the summer there is one animal one is almost guaranteed to see along these back country roads--Cows.
Cattlemen, like loggers, and miners have, during BC’s history, created a lot of legislation which gives themselves special access to public land.  One of those the things the cattlemen have gotten for themselves are grazing permits and licenses that allow them to turn their cows loose over large areas of “Crown” (government owned land) in BC.  As a result, many of the backroads are full of cows meandering back and forth, pooping everywhere; on the roads and in pristine creeks, and eating the vegetation that the wild animals probably wouldn’t mind having.
When one these unwatched cows dies out in the bush, immediately the cattlemen blame wild predators and want to eliminate them from the environment.  I have always found grazing permits and licenses abhorrent and something that should have been eliminated long ago, but unfortunately, it seems to be an unchangeable part of life in rural BC.