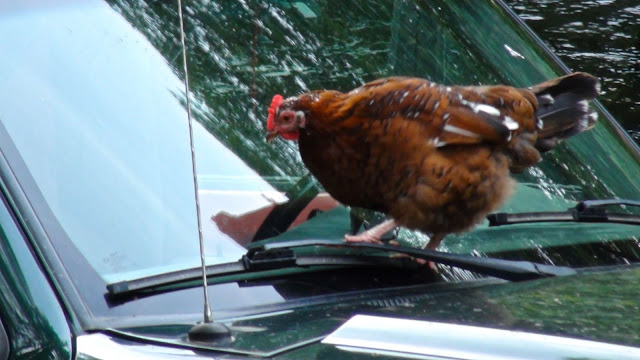 Sadly, we are now down to one chicken.  A week ago, we found a couple of piles of feathers in the yard, and then later, the corpse of her partner in the woods.  We have been feeling sorry for our lone chicken, and last night as we watched it, we noticed that it was exhibiting some rather bizarre behavior.
We were sitting on our lanai with a friend and we all watched as our chicken waddled over to my pickup truck, then suddenly, flew up and landed on the truck’s hood (or bonnet).  This certainly didn’t seem like a very friendly environment for a chicken.  All its surfaces were hard and slippery.  At first I thought that maybe it had discovered the bodies of dead insects up there and flew up to eat the ones on the windshield and vent.   The chicken certainly spent time pecking around on the windshield and vent.
She then spent some time trying to stand on the windshield wipers.  I wondered if she felt comforted by seeing her reflection in the windshield, thinking it was another chicken to keep her company.  Later in the evening, Joan noticed that the chicken was still there on the truck, like it was where she had decided to roost for the night.
Her behavior is a mystery, and will probably remain so forever.  It did make us start thinking about getting her another chicken for company though.