A Wedding in the Ancient Forest 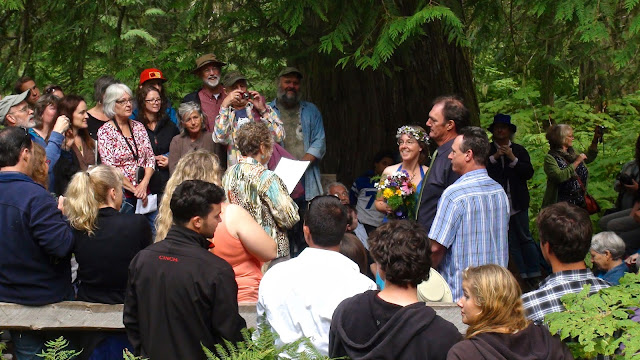 Most of my activities yesterday revolved around the marriage of two friends.  I have never enjoyed a marriage ceremony and the accompanying festivities more.  Micah and Bob decided to have their marriage in the Ancient Forest, a stand of 1,000-2,000 year old cedars that is located an hour west of McBride on Hwy. 16.  Dwarfed by the towering giants that surrounded them, the couple took their vows while family and friends stood in awe of their surroundings and enjoyed the warm camaraderie of the group.
The wedding was a whole day of well organized and coordinated activities.  Because the Ancient Forest is some distance from Dunster and McBride, a school bus was hired for transportation.  It had been a really long time since I had ridden on a school bus, and it was an enjoyable beginning to the day’s main event.  Having everyone in the bus, galvanized the group and made everything feel more like an adventure, than it would have been, if everyone would have traveled alone in a car to get there.   People socialized and chatted along the way as we bumped along the highway to the Ancient Forest.
Micah’s bridal bouquet (a beautiful hand picked display of local flowers with carrot tops for greenery) made the bus trip in a mason jar.  Some one decided that every time the bus traveled over one of the many bridges along the highway, the jar and flowers were passed to someone in the seat behind.  Thus lots of people had to take the responsibility to carrying the bouquet and guess who it was handed to at the last bridge we crossed.  Yep, it was me carrying it off of the bus, and everyone  asked me if I was the flower girl.
Everyone then threw their day packs over their shoulders, and as they entered the forest, the cameras came out and photo after photo was taken of the monstrous cedars as we walked the trail to the “Giant Tree” where the ceremony was to be held.  As we quietly made our way, the hush of the forest was occasionally interrupted by a muffled “boom” in the distance.  As we approached the Giant Tree we discovered the source of the booming.  Bob, who is a drummer, had a big bass drum carried up to the site, and as the guests arrived they stopped ,signed, and wrote their best wishes on the skin of the giant drum.
Bob endeared everyone, when Micah, his bride to be arrived, and he said, “I can’t wait until the end of the ceremony,” and he planted a big kiss on Micah.  The whole event was very easy going and informal, and I was very touched by the whole thing.
Most everyone hiked the loop to the waterfalls, and when we arrived back to the parking lot, a bit peckish and hot, there was a tableful of sandwiches, wraps, chips, slices of watermelon, and cold cans of pop, to re-nourish us.
Once everyone was done stuffing themselves, we got back on the bus for more socializing as we traveled back to McBride where we got off and went home for a few hours of resting until the 6:00 wedding dinner which took place at Dunster.  Again, everything was well organized, the food was delicious, and a big bonfire was set to warm us as the evening began to chill.  I was made aware of my lack of coordination, when everyone was dragged from their chairs around the fire and coerced into join the circle dancing.
The finale to the day was an impressive firework display that lit up the dark sky.  The whole day was a pleasure and a very enchanting day.  I was so happy to be a part of Bob and Micah’s wedding, and I hope that their lives together will be as in enjoyable as the day they provided for us. 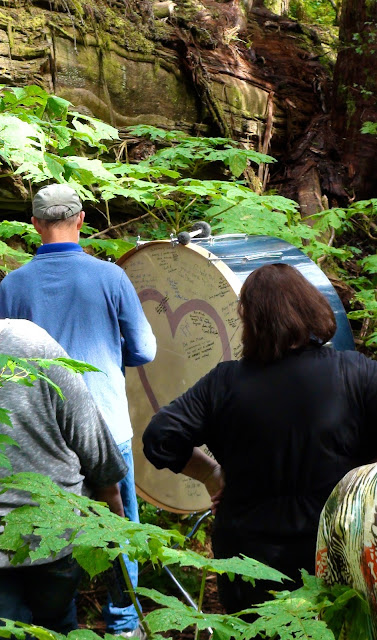