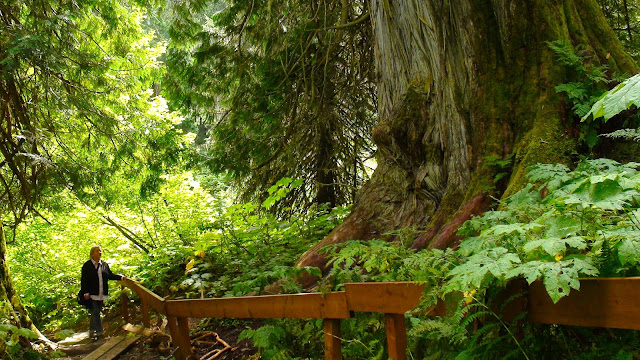 One of the things that attracted me to the area around McBride was the cedar forests.  The dark forests created by huge cedar trees always made me feel like I had time traveled back to some primeval time.  Unfortunately, these forests were disappearing rapidly under the chainsaw, and there was a tense struggle between loggers and those wanting to save some of the remaining stands.
Some of the cedar forests are now protected, and one: The Ancient Forest, has become a popular stop for the tourists who are traveling along Hwy. 16, between McBride and Prince George.  Thanks to the many hours spent by local volunteers and some dedicated academics, who spent time lobbying and building trails, the Ancient Forest is now out there allowing the public to experience an extremely rare ecosystem.
The Pacific coastline forests that run from Northern California, through Oregon, Washington, BC. and Alaska are all classified as Coastal Rain Forests.  The moist air coming off of the Pacific is cooled as it is forced over the mountains along the coast.  When the air cools the moisture condenses and a lot of rain falls.  This results in forests full of giant sequoia, red cedar, spruce, and Douglas fir trees.  The forests of these huge trees are common along the coast.
We have forests very similar to the coastal rain forests, here in the area between McBride and Prince George, but this isolated area lies 800 km away from the coast.  The Ancient Forest is classified as an “Temperate Inland Rain Forest” and it is unique in the world.  The trees are fed by a permanent underground flow of water which streams down the mountain slopes.  It is thought that there has never been a forest fire in this forest.  It is impossible to age these trees because they are hollow in the center but it is estimated that they are between 1,000-2,000 years old.
As I walked through the Ancient Forest on Saturday, I could still see the blue stripes of paint on some of the trees, which marked the boundary of the area to be logged.  It is extremely fortunate that the logging was stopped.  Logging these huge cedars is so extremely wasteful, because most of them are decayed in the center and they shatter into many pieces when they are felled.  So the logging company gets a small amount of useable wood from the total volume of the forest (at an extremely cheap price because it is considered ‘salvage” logging) and all of the massive amounts of debris left on the ground is piled and burned.  It always horrified me to see all the waste wood go up in smoke.
Anyway, the good news is that this small area was saved from the saw, and it is now an inspirational place where the public and go and be humbled by these incredibly giant living things.
The photos show Joan beside a couple of the giants.

See my painting "Cedar" at: www.davidmarchant.ca 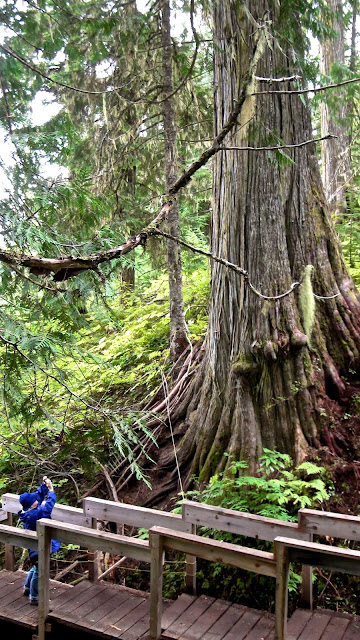