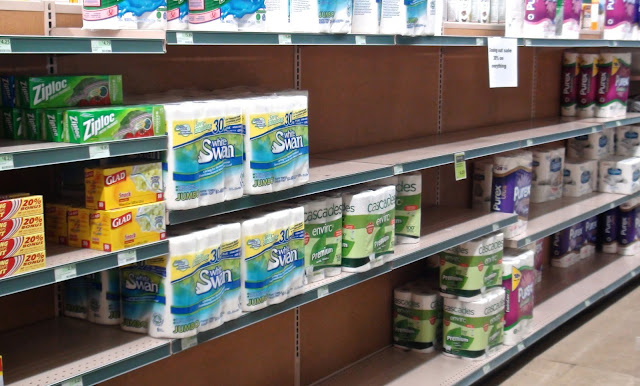 Normally I spend my mornings painting, but today I spent my usual painting time shopping at the grocery.  It usually falls upon Joan to do the grocery shopping, but she is away visiting and recreating in Jasper with our friend, Di.  Last night at the jam session, I was told that the IGA grocery store had begun selling with 30% off of everything--It looks like its going to happen.
A few months ago, residents of McBride were shocked to hear the rumor that the IGA was going to close.  This made no sense.  McBride is a small village and as long as I can remember there has been two grocery stores.  There was the big one--IGA, and AG, a smaller one.  The big one, of course had the best and widest selection of food and did the most business.  It didn’t seem logical that they would be the one to close.
Some time ago, McBride was down to only one grocery; when the smaller of the two closed.  Luckily, they reopened under new management, and we made sure to give them a lot of our business because, we wanted to make sure there were two viable groceries in town.  The AG seemed to be doing well.  Then we were shocked with the news that the big one was closing.
IGA has always had most of the grocery business in town and seemed profitable.  We heard rumors that the store owner, who lives in Vancouver, wanted more money for the lease, and that IGA refused to give it to her.  If this is the reason it is closing, it seems that the owner doesn’t have much knowledge of the economics of small little McBride.  I doubt that any other grocery is going to move into town and use her store, and she’s not going to get much income from an empty building.
There are about 700 people who live in and around McBride.  It’s going to be interesting if all of them are suddenly going to have to depend on AG, our small grocery, for their food needs.  I’m sure everything will eventually work itself out, but right now, its hard to see how it will happen.
This morning at IGA, there were already empty gaps on the shelves, as the most common food stuffs have been carted away by shoppers eager for the 30% discount.  A lot of what I was looking for was already gone, but I did manage to buy a couple of bags full of groceries.