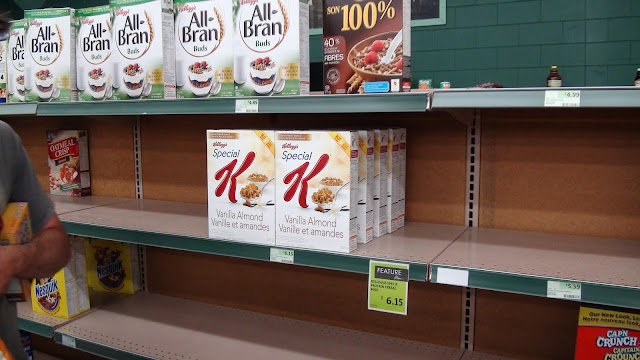 While it is sad, (and scary) to see the biggest of McBride’s two grocery stores closing, at the same time it is very interesting to watch and experience the reaction of shoppers (us) to the “50% Off of Everything” sale that the IGA is running in an attempt to empty out its store shelves.  Joan and I have certainly noticed a difference in our shopping behavior when confronted with the price reductions.  One of the big changes was how our defenses toward junk food weakened.
We usually avoid buying things like potato chips, corn chips, and other such snack food.   If I get tempted, normally the amount of fat on the label, and the price are enough to make me shy away, but once the price is cut in half, it is a lot easier to rationalize those kinds of purchases.   With our tomatoes and chili’s ripening in the greenhouse, and salsa season about to begin in earnest, we weakened and threw several bags of “Restaurant Style” corn chips into our cart.
The cheap prices also makes it easier to try things we have never even considered before.  Yesterday for example, I picked up a bottle of “Hot and Sweet” mustard.  I didn’t even know such a thing existed, but with the shelves mostly empty, the things that are left attract more attention, and since it was half price, I put it into our cart.
It was interesting to see what items were left standing, lonely on the empty shelves.  All of the sweet and sugary breakfast cereals had pretty much vanished, and those that were left were the ones that are branded as being “Healthy”.  Joan, sometimes eats “All Brand Buds”, but it is fairly pricy, so she was happy to discover numerous boxes of it sitting there on the nearly empty shelf at 50% off, and we threw enough boxes of All Bran into our cart to see her through until mid-winter.
Joan noticed that the entire stock of “Cool Whip” (a manufactured whipped cream like topping) was left in the refrigerated shelves untouched.  She pointed out that if the sale would have been down in the US, Cool Whip would have been one of the first products to disappear, due to its popularity down there.  It doesn’t seem to have the same appeal to Canadians as it does to Americans.  We also passed on the Cool Whip and didn’t put any of that into our cart.
Another consideration for buying cheap food was future needs.  I really like beans and I bought many cans of various types of beans which we will store in my workshop until needed.  Every winter, I put out peanut butter for the woodpeckers to snack on and so I bought 5 small jars of peanut butter, that I will serve to the birds once it starts getting cold outside.
The biggest mystery of all concerning “50% Off” sales is this:  Why, when prices are so cheap, do I end up spending so much money?