Fun In The Snow 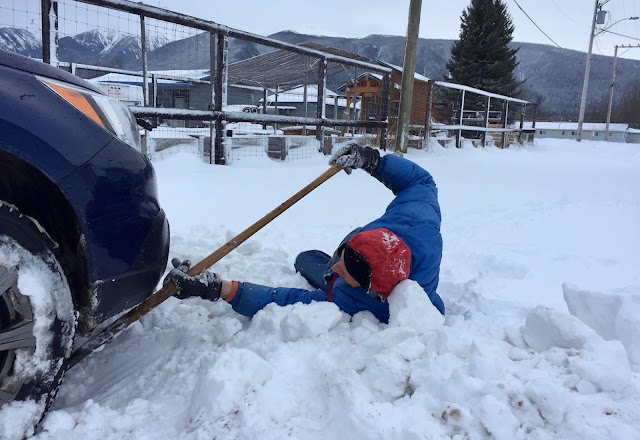 Well, snow used to be fun when I was a kid, but not so much anymore.  Yesterday my wife packed her sewing equipment into the car and drove off to spend the day with other quilters as part of the “Quilting Weekend”.

After I finished writing my blog, I put my coat and boots on to walk the dog on the loop trail.  I normally have Kona on a leash for the walk, but first I wanted to put out some peanut butter for the birds and Kona usually hangs around me to get a few peanut butter licks from the knife.

Just as I was about to do the peanut butter I heard the phone ring inside, so I went in to answer it.  It was my wife, who was in town and had driven into a snow drift that was a lot deeper than she suspected.  The car became high-centered (so much snow piled up under the car, lifting it a bit, so there wasn’t traction in the wheels).   I told her I would drive in with my pickup to free the car.

When I went back outside to discover that while I was on the phone, Kona had disappeared, but I heard barking way over at the neighbors, so yelling at Kona to come home, (which she ignored) I trudged through the snow through the woods, over to the neighbors.  When I came into sight, Kona figured that maybe she should go home, and did.  I put her in the truck, threw some shovels in the back and headed to town.

The car was really high-centered, so I began digging.  The snow under the car was compact and hard, making it difficult to get the shovel in there to dig it out.  After getting some of it free, I had my wife try to back out as I pushed, but the wheels just spun.  I thought I would try to just pull the car backward using the tow rope and the truck.  There are hooks on the front of the truck to attach the tow rope and my previous Subaru’s had hooks on them for the same purpose, but alas, I could find none on this car.  I couldn’t really even find a place I that I trusted not to break or bend, if I tried to hook the tow rope to them, so I put the tow rope back into the truck and grabbed the shovel to continue digging.

Finally I got all of the problem-causing snow out from under the car and we were able to back the car out of the snow.

I was pretty exhausted by the time we got home (my wife had decided not to spend the day quilting after the ordeal with the car).  I still wanted to clear the driveway of snow with the snowblower, even though I was tired and my clothes were wet.  I was able to get snowblow my driveway clear and then I went to the house, took off my coat and boots and collapsed on the couch.

My wife, who was feeling sorry for me, fixed me a great sandwich and soup for lunch.  It had been a hard morning.

You can view my paintings at:  davidmarchant2.ca
Posted by Life in BC's Robson Valley at 08:39