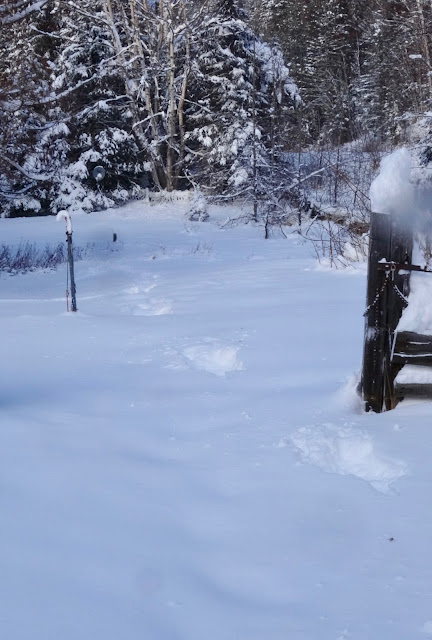 Before all of the snow and frigid temperatures, we used to walk on what we call our “Loop Trail” daily.  At one spot, a small tree had fallen across the trail, so we had to make a detour around the root ball at the end of the tree, then return to the trail on the other side.  We did this for several months.  Kona got used to it.  Then one day I took my chainsaw down to the spot and sawed the fallen tree up, which allowed us to walk straight down the trail.

It seems like her memory had taken precedent over her eyesight.  I have noticed a similar  phenomenon in other animals.

If you look closely at the snow in the photo, you will see big indentations.  Those were made by a deer bounding through the deep snow.  A decade ago I used to have a herd of Angora goats.  I would put their hay in boxes out in the paddock, where you see the deer tracks.  In the winter the deer would visit our compost pile to eat vegetable scraps, then leap across the fence at the far end of the paddock, then walk up to where I fed the goats and eat the left over hay they had wasted.

I haven’t had any goats for 10 years and so there has not been any hay out there for that long, but still the deer continue to take that path, rather than a more direct and easier route to the bird feeder which is there next feeding opportunity.  Again it seems like their past memory is taking precedent over reality, which I find very interesting.