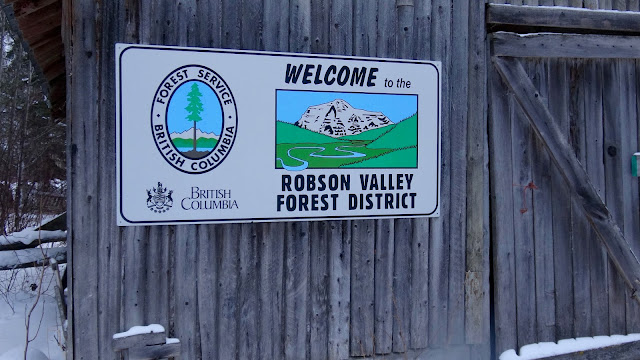 Some of the people that drive past our place might notice this big sign on the barn and wonder what it is all about.  Here is the story:

I worked for 23 years for the BC Forest Service in the Robson Valley Forest District.   For most of that time I had the job title of Draughting Technician.  I was the one who drew all of the legal maps showing where roads were to be built, the areas that were going to be logged, and maps of other things like new Recreation Sites.  I enjoyed the work, but my job description also included doing graphic design, ie making posters and signs, and periodically I had to design those things.  I especially enjoyed putting the creative side of my brain create those items.

The Robson Valley Forest District signs, when they arrived completed back to our office, were of course, no longer needed.

As my co-workers scrambled around trying to plan some kind of employment and future for themselves, I was extremely lucky, because I was old enough and had worked for the Forest Service long enough, to quality for an early pension.  There were three of us in our office that were able to retire.

The office held a retirement party for us and instead of giving us something like a gold watch, they gave each of us one of the now obsolete Robson Valley Forest District signs.  Receiving one of the signs made a bit more sense for me, since I was the one that designed it and had a place to hang it, but I always wonder what happened to the other two signs that were given out to the retirees.  I’m not sure what they were going to do with them.

Because my sign is hung on the side of the barn that faces the road, I don’t see it all that often, but whenever I do, it makes me remember how much I enjoyed those 23 years working for the Forest Service.