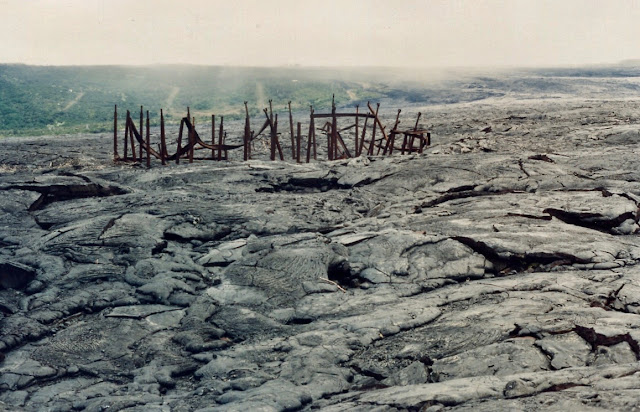 In 1991 when we traveled to Hawaii for the solar eclipse, Kilauea, the island’s active volcano was erupting.  It was not one of those exploding volcanos that was hurling molten lava high into the air, it was more of a leaky eruption where lava was running down the slope toward the ocean.  We drove to Volcano National Park to take a look.

Of course we couldn’t go right up to where the fresh molten lava was flowing, but we could walk out on the black, hardened lava to see some of the what it had done.  The lava had run over part of the residential area and destroyed a community.  We did see the remains of some structure (above) that had been razed by the flowing inferno.

There was probably still hot lava flowing beneath the hardened crust in places where we walked ,because once we followed it to the ocean shoreline, we could see steam, caused by the molten lava, where it was pouring against the sea water.  If you look closely at the photo below you can see a small section of orange which is molten lava.

I find volcanos fascinating and I was gratified to see a tiny bit of Kilauea in action. 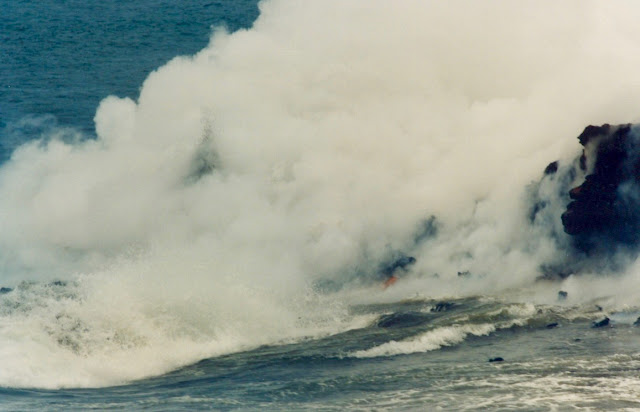 You can look at my paintings:  davidmarchant2.ca
Posted by Life in BC's Robson Valley at 08:50