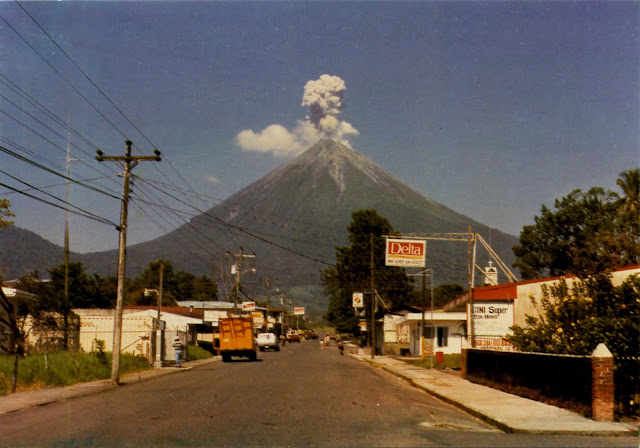 I have always been interested in geology, and certainly one of the most interesting parts of that Earth Science concerns volcanos.  My first time to see an actual volcano was in 1969 when I took Peace Corp training which happened to take place on the Big Island of Hawaii.  While I was there, Kilauea, the island’s most active volcano wasn’t dramatically erupting, but it was fidgeting a bit, enough to light up the ash clouds that billowed above it during the night.

Years later, on a distance horizon, I saw plumes of ash slowly belching from one of the several volcanos that surround Antigua, Guatemala.  Antigua, which I think once served as the ancient capital of Guatemala, was full of old the ruins of many cathedrals, that had been destroyed by earthquakes in the unstable geological area where it is located.

One of the most iconic looking volcanos I have ever seen was Arenal, the Costa Rican volcano you see in the photo above.  Arenal was also experiencing some indigestion and we signed up to take a night tour up the volcano.  We piled into a van with a small group of other tourist and were driven up a bumpy road on the slope of the volcano.   When we got out of the van we could see the underside of the ash cloud that had formed above Arenal, dimly illuminated by the lava deep in the crater.

We didn’t get anywhere close to the crater, but you could hear a sort of “breathing” sound from the volcano.  One thing that is never mentioned in all the adventure movies that include erupting volcanos is the very strong smell of sulfur.  It is enough to keep a person away.

After the night visit to Arenal, our tour guide detoured us to experience a special treat.  A friend of his was caretaker on a property close to the volcano.  The property owner was away and so we got to sneak into the place and take a warm swim in a volcano heated river  (Photo below) 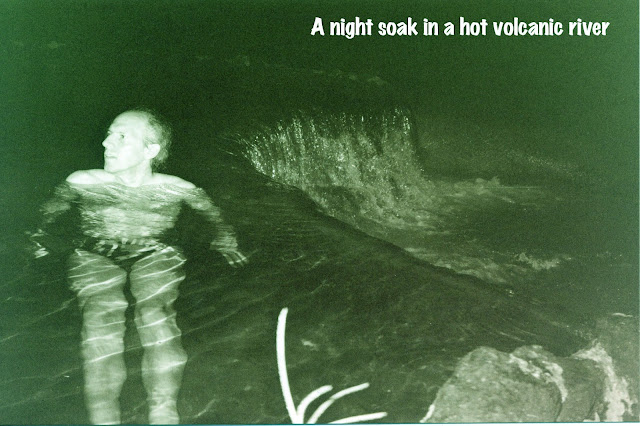 You can view my paintings at:  davidmarchant2.ca
Posted by Life in BC's Robson Valley at 10:22