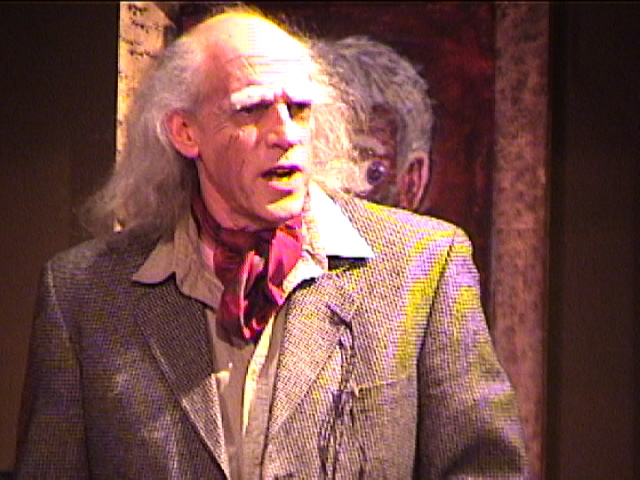 During my life I have spent a lot of time dabbling in the Arts.  At present it is mostly painting, music, and writing, but in the past I have indulged in photography, video, pottery, carving, and even drama.  My first foray into drama happened when I was in high school.  I was a student at a huge high school that offered a lot of extra curricular activities.  It was well known for its musicals and starting in my sophomore year, I began participating in them.

I was in the chorus of Brigadoon, then the following year I was again a singer in the chorus, but also started off a song by playing the introduction on the banjo as a character called “Banjo Sam” in the school’s production of Oklahoma.   In my senior year I was in the cast of My Fair Lady, as a singer, a dancer, and a character referred to as “Selsey Man” with one spoken line with an accent.

When I attended the University of Evansville, which had earned nationwide recognition for it’s dramatic productions, I took part in a couple of it’s offerings.  I played the part of one of the “Guests” in the farcical play, “A Flea in Her Ear”. (If you haven’t figured it out yet, I seemed to seek out parts where I  was on stage, but didn’t really have to do much.)

That was the case when I got a part in Marat Sade, a bizarre play supposedly put on by the inmates of an insane asylum.  Type castings made me a natural, as one of the inmates.  It was a really enjoyable part, where I didn’t really have to do much except look crazy while wandering around on the thrust stage close to the audience, staring at them.

My part became more important, when one of the major actors, who was supposed to be hung up on a cross during one part of the play,  had to go into the hospital for his leukemia, leaving the play is disarray.

The director wanted to continue to use the cross scene despite the absence of the character, and had several time commented to me how much I looked like Jesus, with my long hair and beard.  He decided that when the cross scene came, the inmates would just grab me, and string me up on the cross, hoisting me up above the audience.   This action didn’t make much sense, but the play was fairly chaotic anyway, so it probably didn’t make much difference to the audience.

It was one of the strangest feelings of my life to find myself tied to a cross, swaying above the audience.   I hung there not really knowing what to think of the situation.

McBride has had an active drama group that used to put on a play every year until Covid hit.  Although I hadn’t been a part of any of their productions, in 2005, after one of their main actors had to dropped out of their upcoming production of the comical mystery, “Tiptoe Through The Tombstones,” they began to pressure me to take the part.   They urged me to play Augustus, the domineering patriarch of the murderous family that made its living by killing people.

Augustus was one of the play’s major characters, appearing throughout the play with a lot of lines of dialogue (until he was murdered).  I was of course very hesitant about doing it, being afraid of the responsibility of learning and remembering all of Augustus’s speeches, but in the end, the pressure from the cast, most of which were friends, melted my resistance, and I became Augustus (Photo above).

Because Augustus was such a domineering person, many times in the play, I had to yell abusively at  the character played by Marilyn Wheeler, a kindly older local woman.  I think I often made her cower when I began my angry diatribes at her, and inside I felt horrible for doing it, but that was the part.

Being in a play was fascinating, and also a bit scary.  Sometimes during a performance, someone would forget or misspeak their lines, which would really cascading mess in the flow of the dialogue, but somehow things miraculously eventually got back on track.

I really didn’t like the pressure of the performances, so after “Tombstone” was over, I shied away from trying out for any of the other plays, preferring to sit in the audience instead of being on stage. 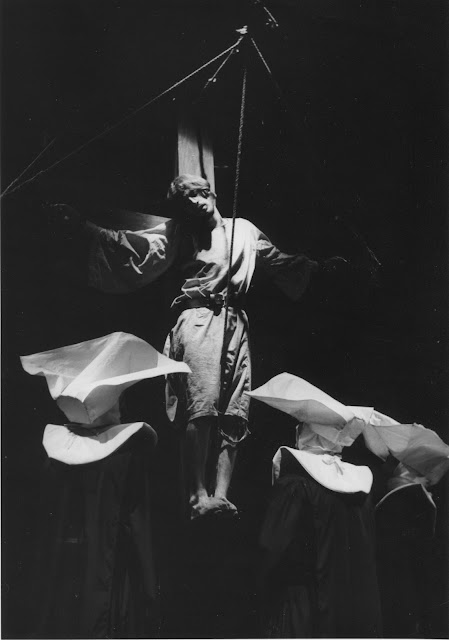 You can view my paintings at: davidmarchant2.ca
Posted by Life in BC's Robson Valley at 09:16