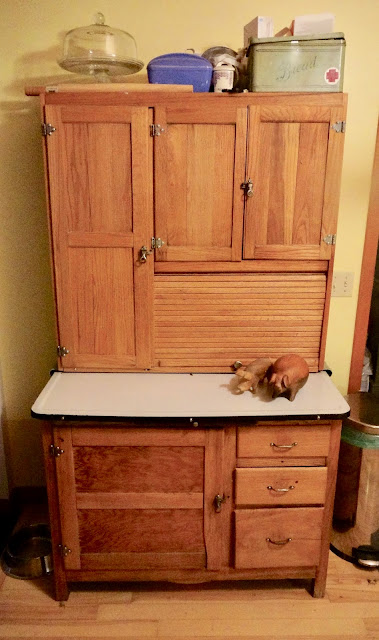 For a few days, every time I got close to our hoosier (photo above) I started smelling what seemed like a dead mouse.  Every once in a while we catch a mouse in a trap and don’t realize it.  Eventually when the corpse begins to ripen, it lets us know by its odor.  That same smell was what I was emanating around the hoosier.  I didn’t remember putting a mouse trap in the area, but I checked all around on the floor under it, but found nothing.

Yesterday as the odor intensified, I knew that the source had to be found, so it could be eliminated.  I had never noticed any mice up in the hoosier cabinet, but who knows, maybe some adventuresome mouse got up in there and couldn’t get out, so I started emptying all of the items from the upper shelves of the hoosier.

It was then we spotted what I assumed was a mouse cadaver inside one of the glass containers stacked on a shelf.

“Ah, haw,” I thought, “We found the problem.”  Yes we did, however the problem turned out not to be a dead mouse, but a rotting sausage, and boy did it stink.  I could hardly pick up the glass coffin of the putrid sausage, because of the powerful stench.  Holding it as far away from my nose as I could, I took it to the wood stove in order to cremate the sausage.

I guess what happened was that the sausage was put into the glass container to be refrigerated, but was left on the counter, never making it to the fridge.  Instead,the container was seen sitting on the counter and assumed to be a clean one ready for storage, so it was stacked with the other containers in the hoosier.  That turned out to be a mistake with odorous consequences.

Below is a Photoshop-created photo of the sausage in the container.  (The sausage smelled so horrific I couldn’t make myself pause to take an actual photo of it at the time.) 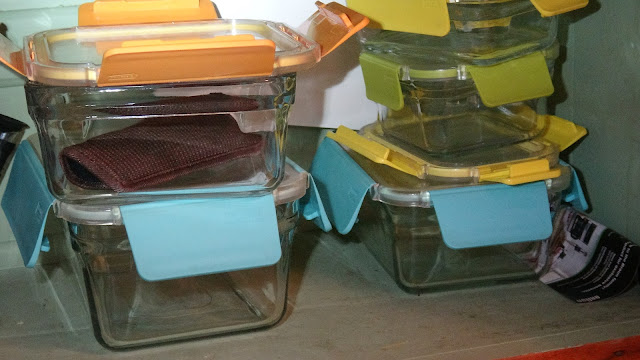 View my paintings at:  davidmarchant2.ca
Posted by Life in BC's Robson Valley at 08:26