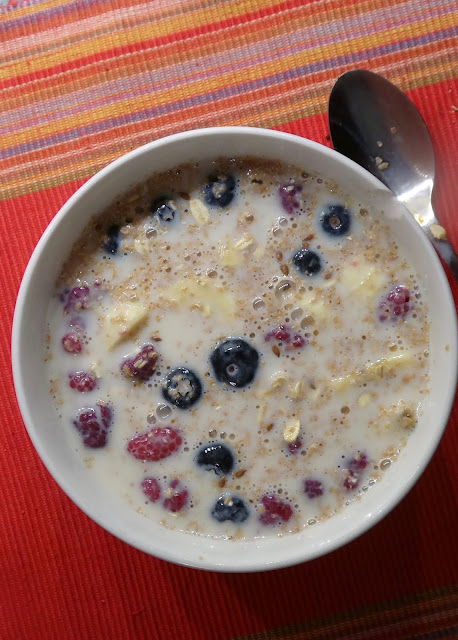 Often, if I wake up in the middle of the night and can’t immediately go back to sleep, I tap a button on my clock radio that will turn it on for an hour, then turn itself off.  Late at night, CBC radio has a lot of shows from foreign countries.  Last night it was a show from the English DW station in Germany.  They were discussing an interesting thing about breakfast.

While most people demand having a changing variety of different foods for their lunch and evening meals, most like to have the same thing, day after day, month after month, and year after year, for breakfast.  That is certainly true for me.  I have been eating the same thing for breakfast for decades.

I always have a bowl of oats with prunes and bananas, in soy milk (I eat it cold, no cooking).  Often I also put in some berries, if available.  Today I added blueberries and raspberries.

It’s strange that I never get tired of having it for breakfast.  In fact, I find it disturbing if I have to eat something else instead, even though I have eaten this same breakfast, day after day, for decades.  I know I would get a upset if I had to eat the same food for lunch or dinner, for even for two weeks.

I wonder what makes breakfast different.