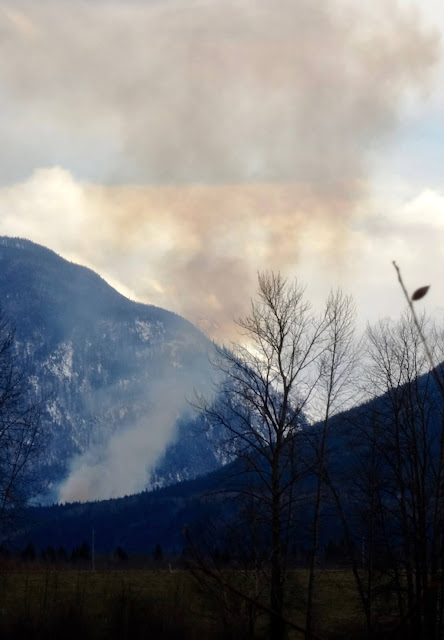 While a worldwide gathering is taking place in Scotland to try to come up with ways to slow the existential situation our earth is facing because of global warming, the BC forest industry was showing us how much it really cares about that, by burning huge piles of “waste wood”, just to get rid of it.  This is a common forestry practice.

They put waste wood into a big pile and then set it ablaze.  Anyone who has ever been around commercial logging knows the tremendous amount of trees that are cut down then never used for anything, just burned, so that it is not in the way.    Pile burning is better than what they used to do; burning the whole area that was logged, but pile burning is still putting a lot of carbon into the air, needlessly.

I was appalled a couple of decades ago when I was employed by the Forest Service, and the BC government put out a special report trying to justify the burning of waste wood, stating that it was not adding to global warming, because wood was “renewable” and more trees would grow and suck up the carbon.

Of course, when a tree is cut down, the carbon in it will eventually go somewhere, but if left to decay on the forest floor, it’s carbon could take a century to go somewhere else; some into the air for sure, but a lot the carbon would be held in the rotting log until it was slowly taken up and used by fungus, insects, and other plants.  When the waste wood is burned, the carbon immediately goes into the atmosphere all at once, and sits up there creating the greenhouse effect that is devastating the earth.

Some of that atmospheric carbon would eventually get taken up by a new trees, but it may take a hundred years for that to happen, meanwhile that rapid accumulation  of carbon is causing our only home planet to get hotter and hotter.

There were two slash burn piles releasing carbon yesterday; one east of McBride, the other west of McBride. 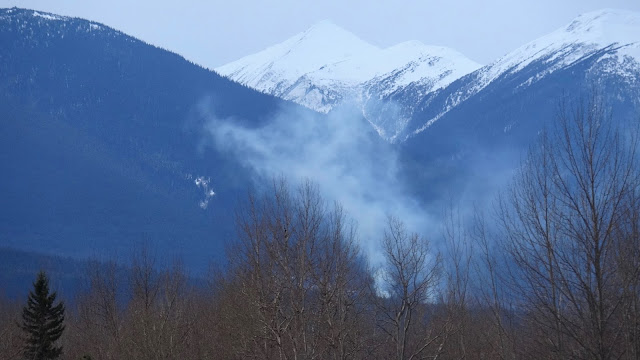 You can see my paintings at:  davidmarchant2.ca
Posted by Life in BC's Robson Valley at 09:34