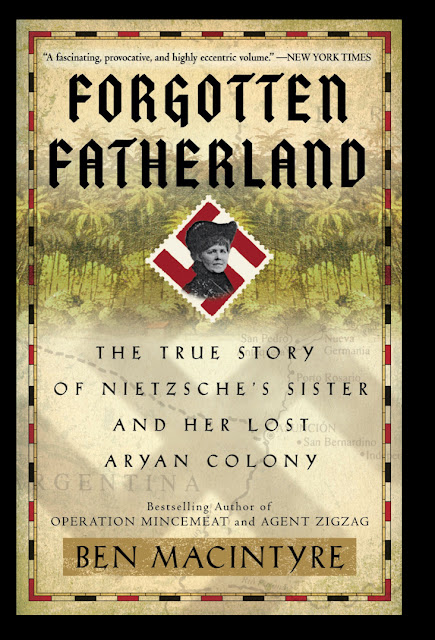 Forgotten Fatherland: The True Story of Nietzsche’s Sister and her Lost Colony

I found this book was in the library’s biography section, but I was surprised when I started reading it because, besides focusing on the life of Elisabeth Nietzsche, who I thought was the subject of the book, it  dedicated a huge number of pages on the life of her famous brother, Friedrich Nietzsche, and was also part travelogue, documenting the author’s excursion to the jungles of Paraguay.

Elisabeth Nietzsche is someone who very few people know about, even though she was very influential in the rise of Nazism in Germany.  Her famous brother, Friedrich Nietzsche was elevated to a place of admiration by the Nazis, but it was his sister Elisabeth, a Nazi supporter, who had rebranded Nietzsche’s work and his philosophy to fit Nazism.  Friedrich Nietzsche, the philosopher, was neither an anti-Semite or a German Nationalist, in fact, he really didn’t love his native Germany all that much.

Elisabeth and Friedrich had a close relationship growing up, and Elisabeth was very proud when Friedrich’s scholarly writings began to get some attention.  All of this was in the late 1800’s.

Elisabeth married a man of little note, except for is virulent anti-Semitism, something she also had come to believe in.  Friedrich, hated the anti-semitism of his sister and had little use for her husband, Bernard Foerster.  Foerster, along with Elisabeth, concocted a scheme to create a German racist and vegetarian utopia in the jungles of Paraguay, called “New Germany”.

They talked it up, raised money, and in 1877 with a few a dozen or more like-minded anti-Semites, crossed the Atlantic to South America, boated up rivers, to the jungled area where Foerster had made arrangements with Paraguayan officials to set up his German colony.  Friedrich refused any part of the scheme and remained in Germany and thought the whole idea was crazy.

The German settlers struggled.  As the leaders of the colony, Foerster and Elisabeth ended up with a big fancy house, while the other Germans settlers struggled on their allotted land holdings, living in small shelters, trying to survive on the farms they hacked out of the jungle.  Foerster and Elisabeth, who were under the gun financially to the Paraguayan government, sent glowing reports back to Germany, about their new German colony, hoping to solicit more funds and more settlers; both of which were in decline.

Foerster, began to suffer under the pressures of the failing experiment and moved to a nearby city, with the excuse of raising funds, while Elisabeth did her best to keep New Germany functioning.   Foerster fell into alcoholism, then committed suicide.  Elizabeth swallowed her pride and returned to Germany.

By this time Friedrich was fairly well known for his writings and spent a lot of time with the composer Richard Wagner and his wife.  Elisabeth was also happy to hobnob with the Wagners and continued to be, even after Friedrich and Wagner parted ways.

Friedrich contacted syphilis which slowly led to insanity.  Elisabeth took care of him and after his death in 1900, she took over his works, and began to write anti-Semite and Ultra-Nationalist works which she attributed to him.  She began a public relation campaign to make Friedrich more famous, she fund raised and established a museum dedicated to him.  Her stringent anti-Semitism didn’t prevent her from accepting money from Jewish donors.

Her publicity and works attracted the attention first of Mussolini and thshe was a very old lady.  Their power encouraged Elisabeth to turn out more racial and nationalistic writings which she attributed to Friedrich Nietzsche.  When she died, Hitler organized a big Nazi funeral for her.

The German colony which she and her husband started in Paraguay slowly collapsed under the lack of funds when the reality of the South American German colony, filtered back to Germany.  The settlers were trapped in the jungle, too poor to pay for a return to the “Fatherland”.

Today all that exists of “New Germany” is an overgrown, impoverished area, populated with light haired, blue-eyed, residents, stubbornly marrying among themselves to maintain racial purity.  The interbreeding is contributing to a collapsing gene pool which is beginning to cause physical problems.

Forgotten Fatherland was certainly a well-researched book, and I learned a lot of history about something I wasn’t aware of.  I enjoyed reading about the author’s horrible-sounding jaunt through the Paraguayan jungle to discover what was left of Elisabeth’s racist utopia.