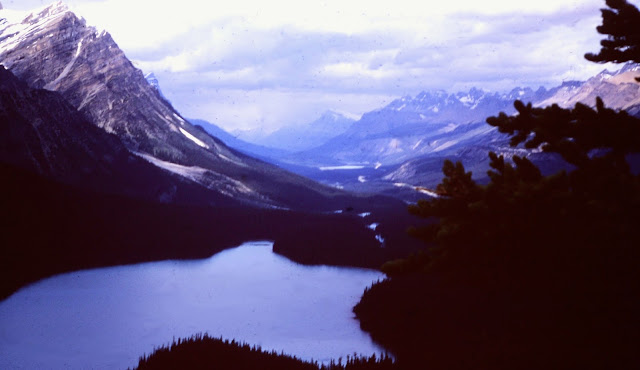 In January of 1973, I mailed off a letter of inquiry to the government of Canada, telling of our wish to immigrate, and asking how we should proceed.  They sent back the necessary forms to fill out, but there was one big hurdle that had to be jumped— we wouldn’t be accepted as landed immigrants unless we had been offered a job that no Canadian wanted.
The
In the August of 1973, Joan and I packed up our green International Scout with suitcases and supplies, squeezed Nancy, my sister, who wanted to come along for the ride, into the back seat, and made our way along the scenic route to Canada .  First we drove west to Colorado, then followed the Rocky Mountains northwest to the border.
On the car radio as we drove, we listened to the Watergate Hearings that were, drip by drip, bringing President Nixon down.  The further north we got, the more spectacular the mountain vistas became.  In Colorado, the Rockies were great.  In Montana, Glacier National Park, was better yet, but after we crossed the border into Canada, and started up the Icefield Parkway that ran through Banff and Jasper National Parks, we were totally blow away, and I was running out of film.
Our final destination in Canada was Victoria, BC.  The only connection I had in Canada was my uncle’s family who lived there. My cousin, who was like a brother to me, sometimes visited Victoria and always came back with glowing stories about what a great place it was and how he was going to move there when he grew up.
We were enchanted by the ferry ride to Victoria which cruised through the deep green salt water, and beside the wave-beaten rocks of the mossy tree-covered islands along the way to Vancouver Island .  When we arrived in a Victoria and found the address we were seeking, we were treated like family by the Hennekes clan, my uncle’s family.
They put us up, fed us, and toured us through Vancouver island’s coastal rainforests, starfish and kelp strewn coastlines, and the British inspired City of Victoria, but in between all the sightseeing, I had gotten a list of all the BC schools that still needed a teacher, and began firing off applications.
When September arrived, the schools in BC opened, and still I had not been successful in finding a teaching job.  I was starting to loose hope when a phone call came from the Superintendent of the Fort Nelson School District.  At the time the Fort Nelson School District covered one third of BC’s northern landmass, a tremendously huge area.
He said there was a very isolated sawmill with no access roads, on Takla Lake, 120 miles north of a Fort St. James that wanted to start a elementary school and needed a teacher. It would be a one-room school with housing and food  provided for the teacher.  After the description the District Superintendent asked me, “Would you be interested in the teaching position there?”
It was a job no Canadian wanted, a job that would enable Joan and I to receive our coveted Canadian Landed Immigrant status.
“Yes, I replied, “I will accept the position.”

The photo shows Peyto Lake, one of the spectacular scenes that we saw along the Icefield Parkway on our first trip into Canada.