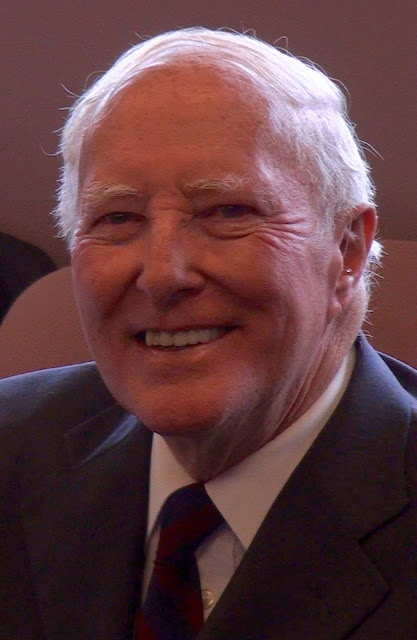 This blog is beginning to read like an obituary column.
McBride doesn’t have a daily newspaper or a radio station, so up-to-date news is usually relayed mouth to mouth.  If you want to know what the latest news in the community is, there is only one reliable source--Pat, at the grocery store check-out.  I was buying some mushrooms and a green pepper yesterday, when she told me that Dr. Cowburn had died on Tuesday.   It was another blow, after still trying to get used to the news that Trevor Jones is no more.
Dr. Geoff Cowburn had long been an essential part of the McBride Community, saving lives and patching people up.  Back in the late 1970’s when we arrived in the Robson Valley, he was the only doctor in the community.  He is in many ways what you would expect of a country doctor--kind, wise, dedicated, and knowledgeable.  When I was concerned about the color of my urine, his first question to me was, “Have you been eating beets?”--I had.
I don’t know when Dr. Cowburn moved to tiny isolated McBride, but it was before Hwy. 16 was built.  Access then was only by train.  On his first day, he and a nurse had to perform an emergency appendectomy, and deal with two tubal pregnancies.  Being the lone physician for such a large undeveloped and isolated area must have been a huge burden.  Previous doctors had left because it was just “too much work”, but Dr. Cowburn stuck around and worked until five or six years ago, when Jane, his wife died.
Dr. Cowburn did have a life outside medicine.  We discovered some of his other interests when we boarded one of his horses at our place.  He would come periodically and spoil the horse with a warm mulch of oats and sorghum.  One year we ended up driving his horse to Spruce Meadows, Canada’s big equestrian center in Calgary.
His other big interest was flying.  It was always a treat to see his bright yellow Tiger Moth biplane circling and puttering against the blue sky and mountains.  His plane also played a part in his doctoring.  There are stories of him flying to see isolated patients, landing in their fields, and delivering prescriptions to places as far away as Blue River, BC.
If there was an emergency at the hospital, when he was out flying around, the hospital staff would put a white sheet on the roof of the hospital to signal that he was needed at the hospital.
Below, is a photo of Dr. Cowburn, in his Tiger Moth. 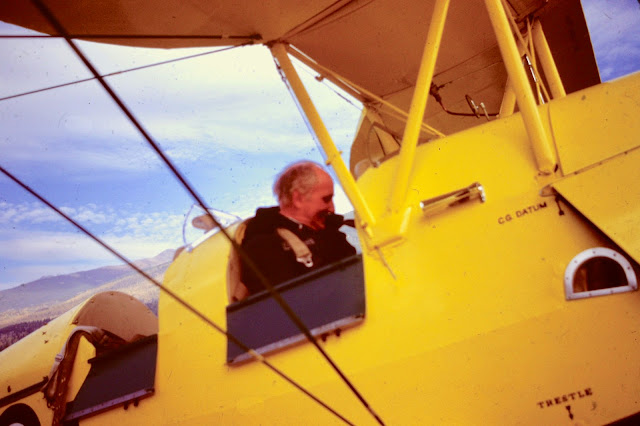 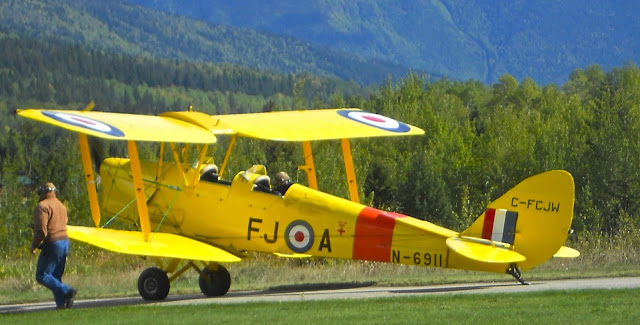