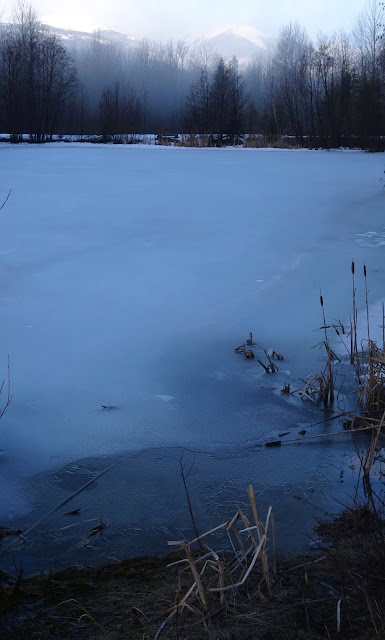 It is my habit in the morning to walk with the dog and cat around the pond.  I haven’t been doing it for the last week because it was getting so difficult because of the deteriorating snow.  The path which is hard packed snow was beginning to slump around the edges, thus becoming narrower and narrower.  As the edges wore down, every other footstep would slide off into the 15 inch (45cm) deep snow on the side of the path.  So I just quit walking the trail until conditions got better.
Last night it rained and then froze which gave a hard crust to the 12 inches (30cm) of snow still left on the ground.  My path is now elevated higher than the surrounding snow.  Anyway this morning when the animals and I went out to feed the birds, they both walked over to the path like they wanted to do the pond walk again.  Since the snow was harder, I relented and off we went.
I quickly discovered that the conditions were horrible.  Whenever I stepped down, at first it seemed like the snow would hold me, but then my foot would crash through and sink about a 12 inches.  It was hard going and several times I thought I would abandon the walk and return home, but whenever I looked at Skye and Lucifer, I saw their begging eyes, and they seemed to want to continue (the reason was that both of them were having an easy time of it, because they were able to walk on top of the snow.)
Being a soft-hearted sucker, not wanting to disappoint them, I continued the walk.  Step, crash through, step, crash through, step, crash through.  It was a real pain, but eventually I made it all around the pond.
The one good thing about my difficult walk was the photo you see.  I really liked the color and foggy mountains.


You can view my paintings:  davidmarchant.ca
Posted by Life in BC's Robson Valley at 10:02