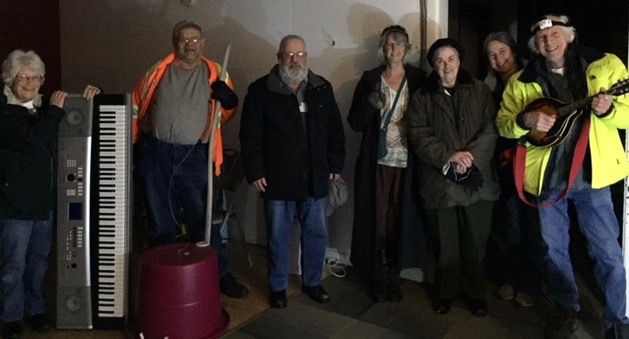 The highlight of my week is always playing at our Tuesday Night Jam Session in the McBride Library Annex.  Last night was going to be a special one because it was the last time we would be able to play in the Annex, because the building has been sold.  It has been our Tuesday night home for four years.
The night didn’t really turn out the way I expected though, because Naomi, the librarian phoned me about a half an hour before I was ready to leave home and said that there was a power outage and the library and annex had no power.  A crew was on the way, but wasn’t supposed to arrive until after our normal 7:00 start time.   I hate these kind of situations where I have to make some kind of decision using guesses.
I called the individuals that usually shows up and explained the situation.  They are a hardcore group who love to play as much as I do, and we decided just to show up anyway with battery powered lights and coats and hope that the power would eventually come on.  The photo above shows us standing in the dark annex.  That’s me with the headlamp on.
After a discussion, it was suggested that we could go over to the curling lounge to play.  Strangely, the power was only out in certain blocks in McBride, and the curling lounge had power.  We packed up our instruments and set up operations in the lounge.  It is always interesting to hear how the sound changes in different rooms, but we had a good session and the evening turned out as enjoyable as always, despite the change of venue.
I thought it was interesting that the germ of doing a jam every week began in the curling lounge four years ago when I heard about some other players coming to jam there and I invited myself along.  I wanted to do music on a regular basis and set things up with the library.
I have enjoyed playing the music every week, and despite the annex being no longer available, we will continue.  Next week we will be playing in the library proper.  I wonder how that will go with the library patrons, obviously the stereotype of “silence” in the library is breaking down.