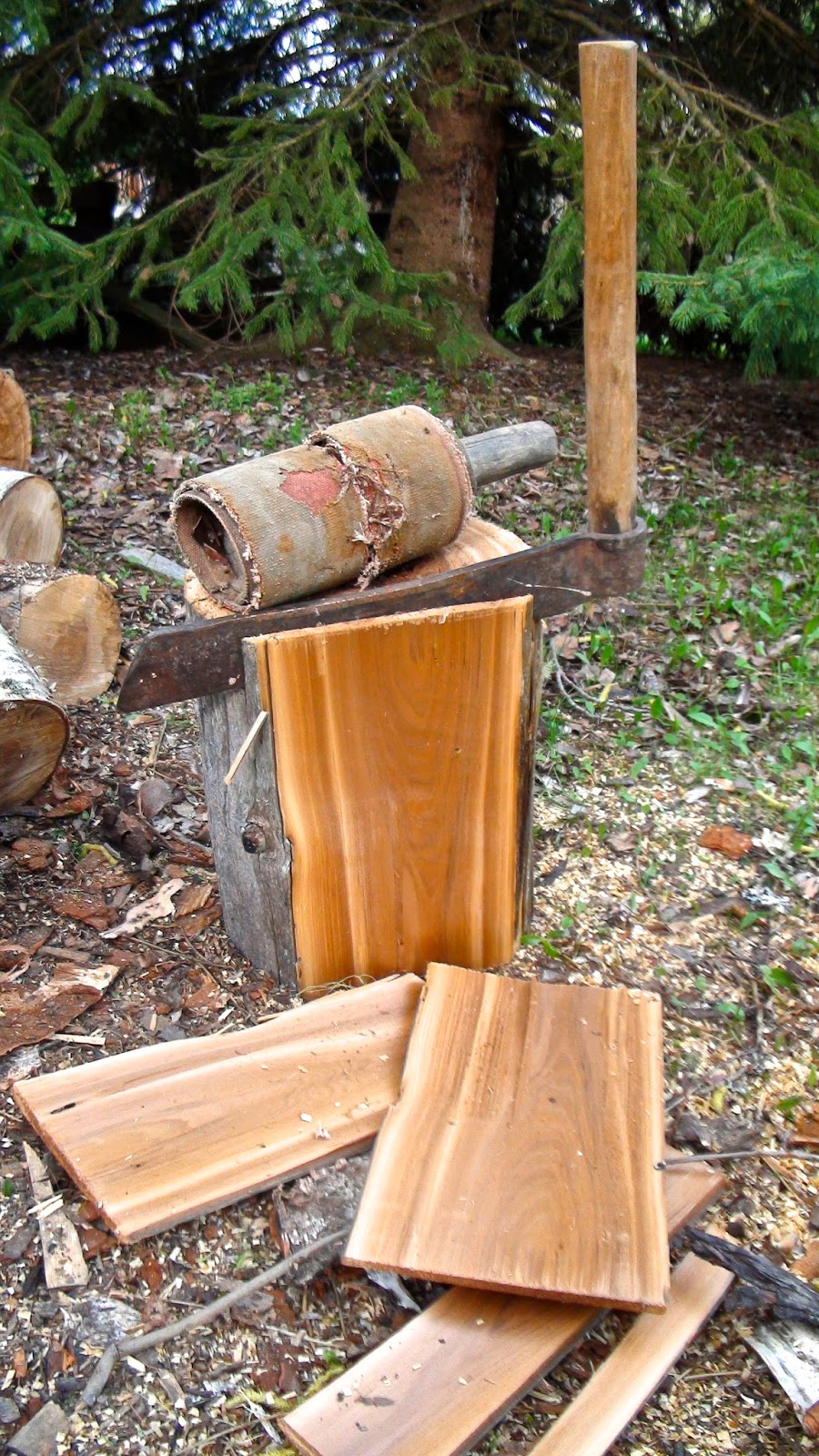 Shakes are shingles, used for covering a roof, and are made from wood.  Since there were a lot of big Western Red Cedar trees in the Robson Valley, early settlers (and a lot of later ones) used cedar shakes to cover their roof.  Cedar shakes were also exported and used on high-end houses in California, until their high fire hazard was discovered.   Cedar possesses some chemicals that make it burn quickly, but it also contains chemicals that preserve it from rotting.
In 1977, when we moved to McBride and bought our present house, it, along with the garage, had cedar shakes on the roof.  Our neighbor’s house, that had been built by “hippy, back-to-the-landers” not only had cedar shakes on the roof, but also on the sides.  I replaced the shakes on my house with tin roofing, because I thought it would be safer if there was a forest fire.  For decades, we used the torn off shakes as kindling in our wood stove.
When I was out getting firewood the other day, I saw a cedar log and decided to collect some of the cedar for kindling.  When I got the pieces home I thought I would try to make some cedar shakes, because the process has always fascinated me.  I had all of the necessary equipment, which wasn’t much--a froe, a mallet and a chunk of cedar.
Cedar works exceptionally well for making shakes because if you have a chunk that has no knots it splits straight and true.  Here’s how you do it.
The froe is the “L” shaped tool you see stuck in the wood.  It is made up of a metal blade across the bottom and a handle.  You place the blade on the shake block about a half inch (1.25 cm) from the edge.  You take the mallet (the roundish cylinder with the handle) and bang the blade of the froe into the cedar.  Once that is in the wood, you grab the handle of the froe and pull it toward you.  This splits the shake off of the block and it flops onto the ground ready to use.
Seeing the nice straight rectangular shake that pops off of the block, always seems like a miracle to me.  For years, blocks were harvested in the cedar forest around here, and because only knot-free blocks of wood could be used, there was a lot of waste.  Now most of those old cedar stands have disappeared and there is not much cedar shake making anymore.
The cedar blocks I gathered have knots and they are really not good for making shakes.  I just want the cedar for kindling, and just made some shakes, because it was fun.