Friday was Minnie's 92nd birthday. She is my mother. A few days ago, I mentioned how, when she gets things in her head, it is easier to see them through rather than trying to convince her of a better way to do it. The birthday cake in the corner of the photo is an example.

The small birthday party we had for her, was on Friday evening. In a normal world, Friday morning would have been the logical time to make the cake, but on Wednesday morning, right after we had finished our breakfast, Mom wanted me to make a cake. Whenever I am with my mother, I always automatically slip into the obedient child mode. I didn't really question why I should make a cake, or ask what the cake was for, I just started making the cake.

She sat in her wheelchair, and told me where the box of yellow cake mix was, then told me to follow the directions. I did, but then, she diverted from what the directions said and had me get three cake pans from the cupboard, instead of the two that the directions called for.

When I dug out the three pans, I noticed that two were nine inch pans and the other was an eight inch pan. I mentioned this to Mom, but said it would be all right. I oiled the pans then added the batter into them. Dividing the batter three ways seemed to me to make each batch pretty thin, and I wondered how well they would rise, but mother knows best.

The directions on the box told me to preheat the oven, so I had the oven on ready to accept the cake pans. When I started to put the cake pans in, mom stopped me and said, "Oh, don't put them in yet, we are going to fix a casserole for supper, and we will bake everything at the same time.

Then I began to wonder how well the thin layer of cake batter on the three pans would weather the five hour wait before baking. "They will be alright," Mom assured me. I questioned her judgement later in the afternoon, when I took a glance at the stiffening batter. I could pick up the cake pans and hold them on their sides, and the batter did not run, it maintained its shape.

It is a tribute to modern food technology that when we finally did bake them, that they did manage to rise quite a bit, although the batter in the eight inch pan only got to be an half an inch (1.5 cm) thick. I freed the cakes from the pans and put them out on a rack to cool. Mom told me that Francine, Mom's helper, was going to make some "White Mountain" icing to frost them, so there they sat. Days passed, Wednesday and Thursday, and then on Friday morning, Francine came and mom instructed her in how to make the "White Mountain" frosting.

Later, mom was asleep and I was in the kitchen writing my blog, as Francine iced and constructed the cake. I wasn't paying much attention to her doing it, but she put the thin layer in the middle. When she was icing the sides, she said, "Hey, this middle layer is not as wide as the top and bottom. Had I been paying more attention, I could have told her about the two 9 inch pans and the one eight inch pan. She ended up just putting more icing around the outside in the middle so that the cake wall looked even.

My aunt and uncle brought two tubs of ice cream for the party and I accompanied the singing of "Happy Birthday" with my mandolin. Mom blew out the candles ( I didn't bother to put the full installment of 92 on the cake). The ice cream and long-lived cake were all yummy we had a nice celebration and gathering for Mom's 92nd. 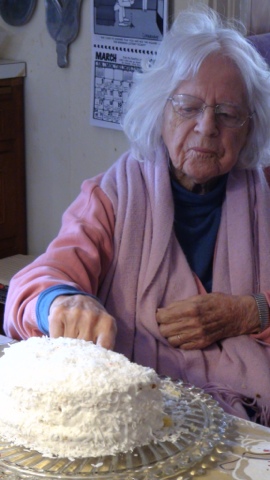