Since this is International Woman's Day, I thought I would tell you about my grandmother. Her name was Sadie Carr Marchant. In 1911, when she was a young lady, living with her parents in Redfield, South Dakota, she was just finishing up a year teaching school. Her father told her about land that was being opened up for homesteading in the wilds of Montana. Sadie had friends who had homesteaded and had considered it herself.

When her school term ended, she went to town to see when the next excursion to the new homestead area in Montana would be. She discovered it would be that very night, she figured if she didnt go immediately, she would probably never go, so she rushed home, and packed her bags. Originally, her father had planned to go with her to seek homestead land, but because of the rush,he was unable to go, so Sadie got on the night train alone, and headed for Great Falls, Montana.

For three days and nights, she watched the flat grassy plains pass by, through the train window. She was impressed with the bustling city of Great Falls, when she finally arrived. She was very disappointed with the area she was planning to homestead in, but fortunately on the train trip, she had met a land agent and he took her out to some other possible areas.

On horseback, they road out to lands overlooking the Missouri River, with the Highwood Mountains jutting up in the distance, and Sadie, knew that was what she was looking for. Back in Great Falls, she signed the papers, to claim the 320 acres near Carter and Floweree, Montana, as her homestead.

She immediately arranged to have a small cabin built on the property, so she could establish residence. She bought a cot and blankets from a hotel in Carter, and during her first night sleeping in the tiny unfinished cabin there was a terrible storm. The roof had not been completed at one end of the structure, and the rain from the overnight storm got the bed all wet.

Sadie was in great fear of both storms and rattlesnakes, and the prairies had both in abundance, but she was determined to complete her quest and waited until her cabin was finished and slept in it several nights, before she finally traveled back to South Dakota to get her possessions.

To read older blogs or to see my paintings, go to: www.davidmarchant.ca 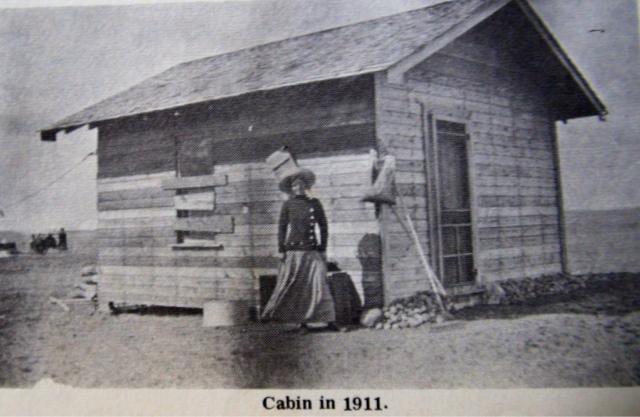