On my first morning after arriving at my mom's house, I was awakened early by a tapping sound. It kept on for more than an hour with some intermittent pauses. I thought right away that it was a woodpecker, trying to take apart the house, but I was still half asleep and was too tired to get up go outside and chase it away. My mom, who is a sound sleeper was unaware of the tapping.

I then forgot about it until yesterday, when, early in the morning, the same same thing happened again. This time I had enough energy to get up, dressed, and go outside to chase the noisy woodpecker away. I slowly walked around the house, scanning up along the eves looking for the woodpecker, I made this trip around the house a second time, thinking that I must have somehow overlooked the offender the first time around, but once again, I saw and heard nothing, so while I was outside I got the morning paper from the mailbox and went back inside to read it.

As soon as I sat down and opened the paper, the tapping started up again. I was not going to be outsmarted by a bird, so I got up, and once again put on my boots and jacket and when outside. This time, as I rounded the corner of the house, I saw a robin dart off from near a basement window, and suddenly, it all became clear what was going on.

The robin, a male, was seeing his reflection in the dark window, and, thinking it was another male in its territory, was attacking it to chase it off. His attacks were not very effective, because every time he returned to the window, he saw his reflection again.

I had witnessed this same behavior with a male robin once before at our house in McBride. Day after day a robin flew at, and attacked his reflection in the window. He attacked several different windows, despite my efforts to put things inside the window to scare him off. As I sit here, I wonder if placing a white piece of paper inside the glass, instead of a dark one, would have been more effective at reducing his reflection.

That story has a sad ending, because one day I found the corpse of a robin laying on the ground beside the house and I assume that it got carried away in its aggression and killed itself by slamming into the glass at too great a speed.

The genes that once gave his ancestors an advantage in breeding with the extra aggression to fight off competing males in the past had eliminated him from the gene pool in this modern age with all of the windows and glass. 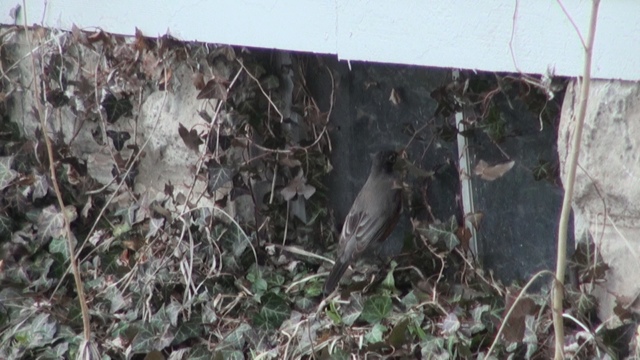