My mother is about to celebrate her 92nd birthday. That is the reason I am in Evansville. Despite her age, her mind is still as sharp as a tack. They say that elephants never forget, and the same can be said about my mother. Sometimes I wish that she would forget some things.

The other day, she asked me to take a look at her nightlight. She said it no longer worked. I tried the switch and came to the same conclusion. I pulled it out of the socket and took it into the kitchen and plugged it in to a different socket, just to make sure it wasn't the socket that was causing the problem. The light didn't come on so I knew that the trouble was in the nightlight itself.

My next line of attack was the bulb. I took the old bulb out and mom's razor sharp memory remembered that she had some replacement bulbs in a small cabinet in the hallway. I put a new bulb in and flipped the switch, but the nightlight still didn't work. A burnt out bulb wasn't the problem either. I closely examined the night light to see if I could find anything else that might be causing the malfunction.

I noticed that the two metal prongs were misaligned. "Ah-ha", I thought, "something must have bumped the nightlight, bending the prongs." I assumed when they got bent out of place, the wires inside the plastic casing got broken, and so electricity could no longer flow from the prongs to the light. The nightlight was toast. I took out the bulb to save it, and threw the nightlight into the trash can. Then I told mom, that it was broken, and we would just have to buy a new one.

"Where is the old one?", she asked.
I told her that the fixture itself was broken and I had thrown it in the trash. They are cheap, and we can just buy a new one.
"Well, dig it out," she told me, " I need to give it to Francine." (Francine is one of her care givers.)
I asked her why she wanted to give it to Francine, and she told me that Francine's husband was an electrician, and could fix it.

I tried to explain, that no electrician was going to spend a couple of hours trying to repair a broken night light. I doubted he could even get in to the casing without breaking the whole thing, but once my mother has gotten something into her mind, she won't let go.

I walked back to the trash can, and dug around in it, until I found the broken nightlight, which I put on the counter, where mom could see it.

In a normal world, I could have just left it in the trash, and the broken nightlight would have just been forgotten about, but I know my mom's mind, and I know the next time Francine comes, mom is going to give her the nightlight to take to her electrician husband to fix. Life would run a whole lot easier, if mom could just forget a few things.

To read my older blogs, or to view my painting, go to: www.davidmarchant.ca 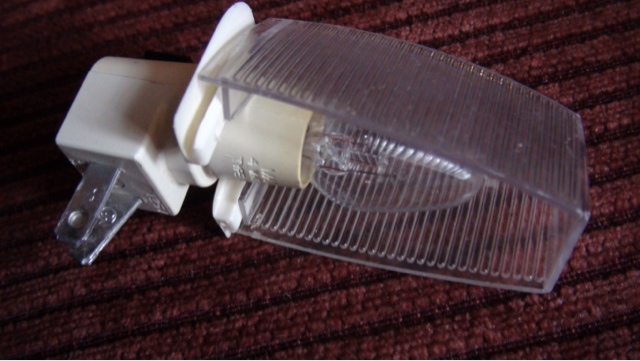