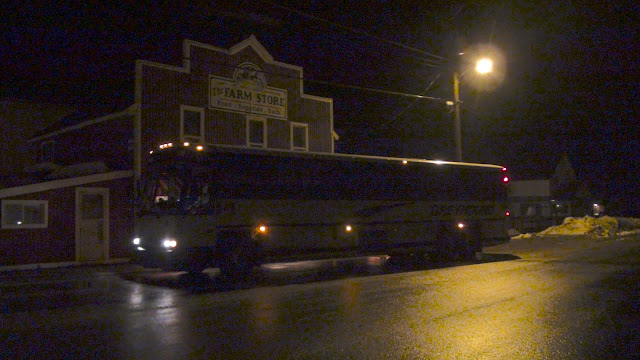 If I was a writer in search of interesting characters, I think I would spend nights, at the bus station of some a city.  Yesterday in my trip home, the last leg of my journey was a bus ride from Prince George to McBride.  After I de-boarded the plane in Prince George, I took the airport shuttle downtown to the bus station.  When I got there around 7:00 PM, I found the doors locked, and a young unshaven guy wearing a hoody, and an older aboriginal woman with a terrible bruise covering the right side of her face ,who were standing by the door, told me that it didn’t open until 8:00.
With an hour to kill, there was only one thing for me to do: eat.  I dragged my suitcase over to the nearby Red Robin restaurant, and had myself a barbecue turkey wrap.  Then as it approached 8:00, I meandered back to the bus station.  As I waited the 6 minutes for the doors to open, several other people joined me.  There was a young woman, who also had facial bruising, and enough bags to fill a Subaru, who said she was heading for Calgary, and a stout old man, who kept himself busy doing something on his smart phone.
Finally a Greyhound employee opened the door and I followed him to the ticket booth, where he shortly opened the sliding barrier and I bought my ticket for the 9:15 Edmonton bus that stopped at McBride.  Then I settled down in one of the plastic chairs to watch, as the bus station slowly filled with people.
A bus from northern BC arrived and the lobby filled with zombie-like passengers, dragging their bundles and suitcases, already exhausted from a daylong bus journey.  Many of them sat down waiting for the same bus I was waiting for.  I overheard couple sitting next to me, say that they had just finished off working the night shift, then boarded the bus up north and rode on it all day.  They were headed for the Kelowna, which meant probably another 12 hour bus ride.  They could hardly keep their eyes open.
There was an woman in her late 20’s, wearing what looked like a long black evening gown made of cheap polyester, generously low cut in the front, and running shoes, with her 12 year old daughter who wore a cheap lacy dress, like what used to be worn with petticoats, carrying on a conversation with a goateed horseshoer who could hardly carry his heavy ladened backpack, complete with a coil of 1 inch rope on the top.  They were all waiting for the doors to open so we could get on the east bound bus.
I could hardly keep my eyes open, waiting for 9:15 to arrive.  When it finally did, nothing happened.  No announcement was made, everyone just continued to sit there.  I noticed an older man carrying a big bag of cheezies, and orange crush for the trip.  I tried to read some more of the novel, I had downloaded on my iPad.  I was a bit surprised, all of these people most of which seemed rather poor, all seemed to have smart phones, and were busy doing things on them.
A few people wandered up to the ticket booth and came back with the information that the bus we were to take, was going to be an hour late in arriving in Prince George.  There was never any announcement made over the PA system.  I thought I should give Joan a call, since she was going to pick me up in McBride.  I called, but could only tell her we would be late, but I didn’t know how late.
Our bus finally came and we loaded at 10:00.  It’s hard to get on a night bus without thinking about the incident that happened in Canada about 5 years ago.  On bus traveling late at night, a man with serious social problems, cut off the head of another passenger sleeping on the bus.  Last night, I chose a seat right up close to the bus driver, instead of entering the dark bowels of the back of the bus.
I arrived in McBride at 12:25 AM, and was happy to see Joan there waiting for me.  It was nice to finally be home sleeping in my own bed.

For older blogs and to view my paintings go to:  www.davidmarchant.ca