I read a lot and I always thought myself to be fairly knowledgeable in American literature, but I had never heard of the book, "My Antonia" (pronounced An'-ton-ee-ah, with the accent on the first syllable) or it's author, Willa Sibert Cather. A few weeks ago, they must have discussed it on "The Sunday Edition", the CBC radio program I generally listen to on Sunday morning. I missed the original segment on the book, but was listening the following Sunday, when they read all the letters that came in praising the book.

I was immediately eager to read it, both because of the glowing reviews it had been given, and also because it was about the settlement of the prairies by homesteaders and farmers who worked hard to make a new life for themselves, much like my grandmother.

I made note of its title, and later went to Apple's iBook site to see if it could be downloaded onto my iPad. I doubted it would be in the McBride library, because I had gotten the impression from the radio that it was an older book (written in 1918), that had sort of fallen off of the radar. I found it there at iBooks, and amazingly enough, it was free. I'm sure you can also download it from other book sites for free.

I immediately downloaded it and saved it for reading on my trip to Indiana. I started reading it in between my plane flights, and while in the air. I found it to be one of those wonderfully well written stories (I hesitate to even call it a story, because it seemed so real), about what life was like on the Nebraska plains before everything got developed.

It is simply and elegantly told, seemingly from the memory of a man about his arrival and life on his grandparent's farm/ranch in Nebraska, and the memorable girl, from a poor immigrant family who settled next door, who became his childhood friend, and remaining so throughout his life, despite their different life paths.

The novel is fairly short, and it is one of those books, I will long remember, for its simplicity in scope and the visual memories it gave me. I don't always read the Introduction to a book, but I did read this one, and I was glad I did, because it sort of sets everything up and gives a special view of the story. So if you decide to read it, be sure to read the introduction.

The photo shows an illustration from the book. In one section, Antonia is forced to leave school and work her family's farm.

To read my older blogs or to view my paintings visit: www.davidmarchant.ca 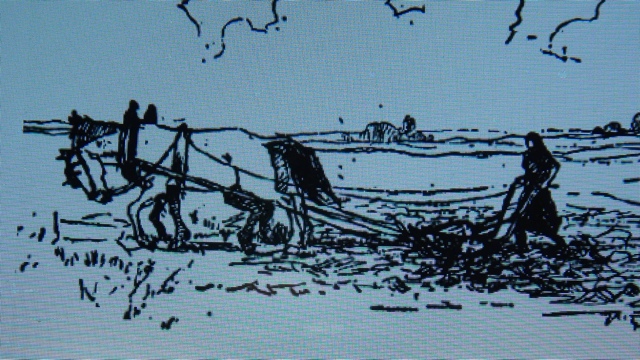