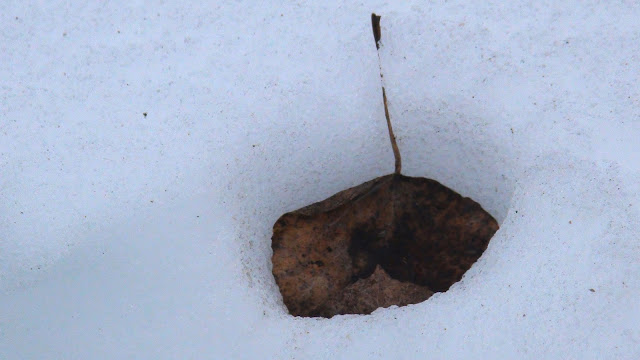 I have always been fascinated at how a bit of dark color can absorb heat.  When Mac, our dog, used to lie in the sun, and I would put my hand on his black fur, I was always surprised at how hot it felt.  I used to have a lightbulb-shaped gadget with four little metal flags, on spokes inside, that would spin around in the sunshine.  It was only the fact that each flag was white on one side and black on the other that gave it the power to spin.
I noticed yesterday when we went out for our morning walk that there was some leaves lying on the top of the snow.  We had had a lot of wind the night before, but I found it surprising that the wind had found some leaves to blow around, since the trees have been naked for months now, but at any rate, there were some leaves sitting there on the surface of the snow.
As that day progressed, the sky remained overcast, but the temperature got to be +4C (39 F).  This was not really a heat wave, so I was very surprised in the late afternoon, that those leaves, being darker in color, than the surrounding snow, had absorbed enough heat to melt about 1.5 inches (4 cm) down into the snow.  It would have made more sense to me if it had been a pebble or something heavier, but this was a feather-light leaf that had sunk, just because of the extra heat it had absorbed.

To visit my blog archive or to view my paintings, go to:  www.davidmarchant.ca