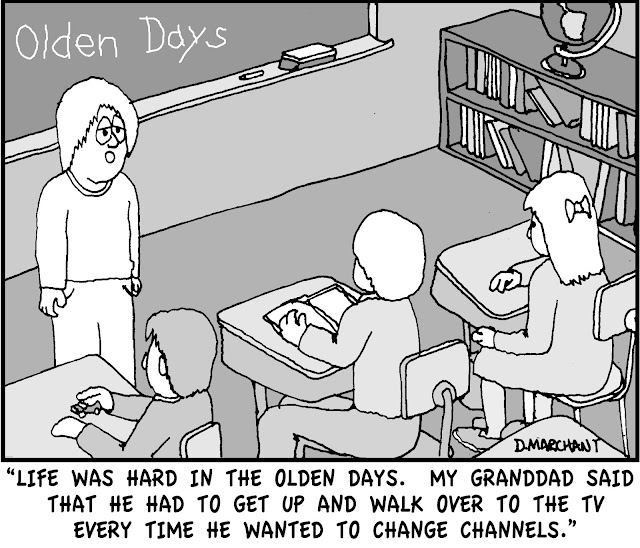 The kids today have grown up with computers, but those in my generation grew up with television.  Our family was not the first in the neighborhood to get a TV, so we kids would often go over to our neighbors to watch television there.   I think it must have been around 1953 when our family finally got a television set.  It was a black and white one, like all the televisions of the day.

Those early televisions were not problem-free.  Like the cartoon above infers, there were no remote control.  If you wanted to turn it on, off, or adjust the volume, you had to get up and walk up to the TV and turn a knob.   It seemed like every time we turned on our television, you had to spend some time adjusting the picture.  It often had horizontal bars across the screen and we would jiggle a little knob back a forth to get the picture.  At other times the picture would roll and another knob had to be turned back and forth to slow the roll and then make it stop.

Those first televisions were always having tubes burn out and we would have to call a TV repair guy to come out to our house to replace the burnt out tubes, so we could start watching TV again.  They had really become a necessity in our lives.

At first we had only got one channel, which was an NBC channel from for away Louisville, that never really came in very well.   Later, our city got an ABC channel.

The first show I remember watching on TV was Pinky Lee, who wore a plaid coat and hat and had a  tiny car that he used to make his entrance.  I remember being upset and sad, having missed the show in 1955, where Pinky Lee collapsed on stage and was carried away.  Everyone said he had a heart attack and died.  I just found out today when I did some research, that he hadn’t died and lived until 1993.

The other early show I remember was the Howdy Doody Show, which featured puppet characters and a fringe-wearing man called Buffalo Bob and Clarabell the Clown, who honked a horn instead of speaking.

A strange show was an adult-oriented afternoon show called Queen For A Day.  Several women would tell sad or tragic stories to the audience and once all the contestants had finished, the audience was called on to clap for the contestant who they thought should be the Queen For The Day.  The “Applause Meter” would measure the loudest applause, and that woman would get flowers and wear a robe and a crown crown and get the thing that she needed in her life, plus other prizes.  It was pretty bizarre.

The biggest television event when I was a kid was Walt Disney’s Davy Crockett.  I was not the only one enthralled by Davy Crockett.  Davy Crocket made me feel special since my name was David.  Kid’s everywhere began to wear coonskin caps.  My parents didn’t buy me one, but my talented mother made one for me out of some old fur she had.

Later of course, color TV’s began to appear in stores and our family was dazzled by having blue skies and red blood.  Then televisions appeared with remote controls and that made watching television a whole lot easier.

Look at my paintings:  davidmarchant2.ca