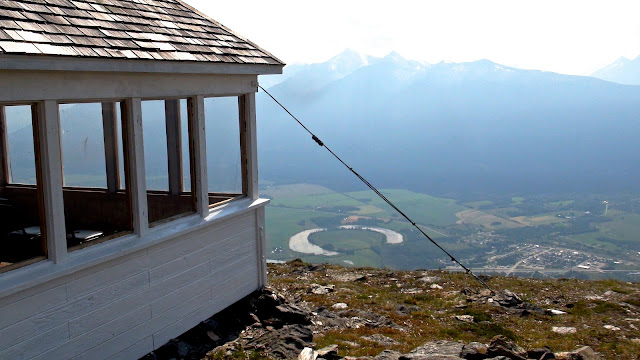 In 1979, our second summer after moving to McBride, I was working full time at a local Split-Rail Cedar Fencing Mill.  That first summer I had worked on my first forest fire and so I was known at the McBride Ranger Station.  In the summer of 1979 the forest fire conditions were high and the Forest Service called me to ask if I would spend my weekend days acting as a Lookout up on McBride Peak.  I immediately told them I would.

I loved being up in the alpine, and to be paid for being up there seemed like a dream job.  I had already spent a couple of weekend days being a Lookout Man for Forestry, so I knew what to expect.  I was supplied with a pair of binoculars and a portable radio, so I could call in any fires I spotted.  I drove  my 4-wheel drive Scout up the terribly rocky, bumpy, trail to get up to the alpine.  The “road” had tight switchbacks and a scary section where the narrow road clung tightly against a rock face beside a cliff.  The drive up McBride Peak was always an adventure.

On this particular trip up I started hearing a rattling noise in one of my hubcaps.  I figured that some rocks had gotten in it.  Once I parked the Scout, I put on my backpack and hiked up to the old forestry lookout building (photo above).  I picked out a grassy spot, sat down, and began scanning the valley bottom and distant Cariboo Mountains for smoke.

I saw three different columns of smoke and reported them to the office.  They turned out to be “old news” to Forestry.  Two were Burning Permits that they were aware of, and the third which was down the valley west of McBride was a fire at the dump, something that was always happening.  I continued my scanning, moving around to different spots on the ridge.

After a few hours clouds began to darken and thicken and it didn’t take long for it to begin to hail.  I rushed to the lookout building and waited until it let up.  Storms on the mountain tops can be pretty intense and dangerous if there is lightening.  The visibility of the valley bottom had become obscured by clouds and hail, so I called into the office and they said I could come down.

The storm intensified once I got back to the Scout, but I slowly bumped and jarred myself down the road to the valley bottom.

The next day, Sunday, Forestry again wanted me up on McBride Peak as Lookout, but I could wait until the afternoon.  During the morning I decided I would pull off the hubcap and remove the gravel that was inside.  When I pried it off I was shocked to see, not gravel, but a lug bolt that had been sheared from the wheel, and other lug nut.

Yikes, I thought, driving up and down that rocky, steep, trail, without all of the lug nuts could have resulted in a dangerous accident.  I was sure glad I had taken the time to check under the hubcap.  I tightened all of the remaining lug nuts and drove slowly to the Ranger Station before heading up the mountain.  Instead of driving my Scout, I was given and Forestry pickup for the trip. 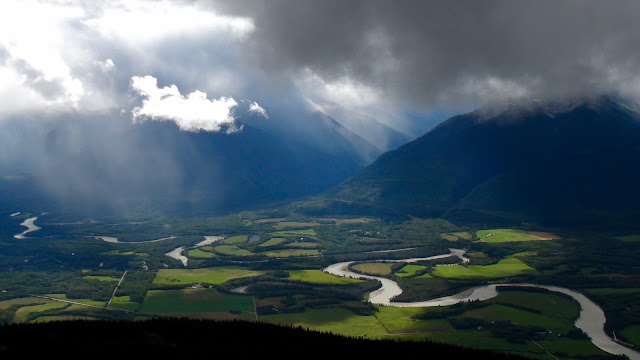 View my paintings at:  davidmarchant2.ca
Posted by Life in BC's Robson Valley at 09:14