Pick It Up, Throw it, Watch It Roll 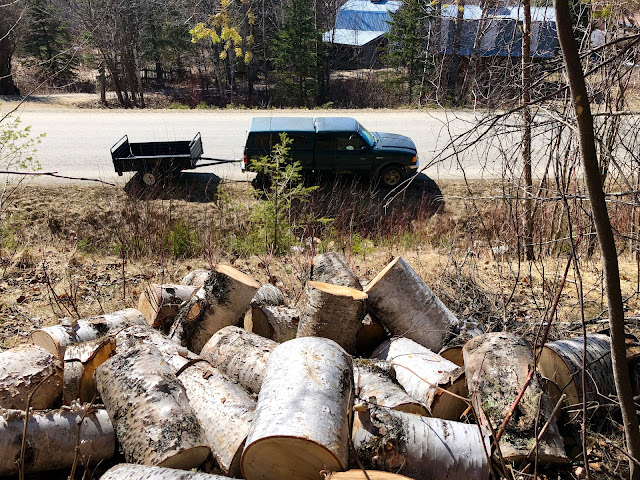 I heard a quote that was attributed to Henry David Thoreau, although I am not sure that is true.  The quote is:   Firewood warms you twice, once when you split it, and again when you burn it.”

Whoever said it, was underestimating the warming power of firewood, at least that is my experience.

I made a start on collecting my firewood the other day.  I hate cutting down living trees for firewood and so I generally look for something that has blown down, or been cut down and abandoned.  On my mountainside property across the road, I noticed some birch trees (the best firewood around here) that had reached the end of their life and were dying.  I decided to cut them for firewood while they were still useful.

One of the problems with the plan was that the birch were quite a ways up the steep slope, so after cutting them down and bucking them up, I had to get them home.  Birch is a dense heavy wood, but at least I had gravity and the steep slope to help me.

I would pick up each piece, throw it down the slope, and watched as it bounced this way and that, until it hit against a tree or brush that stopped it.  After I had done this with all of the pieces I had cut, I walked down to where they were scattered, and once again picked them up, threw them downslope, watching them bounce downhill again.  The photo shows them lying, ready for yet another bounce down another slope to the road.

On the third throw and bounce, they landed in the wet ditch at the side of the road, below where I had my truck and trailer parked.  Once I got them all there, I had to do the hardest task of the day; picking each one up, carrying it up the steep slippery slope of the ditch and putting them into the trailer.

I worked up a sweat each time I had to pick them up and throw them, so I really have gotten a lot of heat out of the firewood already, and I still had to unload them, and then split and stack them.

Country living is not just sitting around and enjoying the scenery.

Take a gander at my paintings:  davidmarchant2.ca