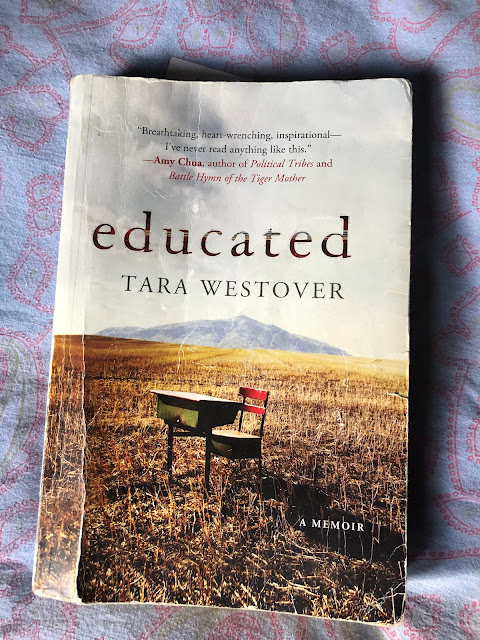 The McBride Library Book Club theme for April was “New Beginnings”.  I chose the book Educated, by Tara Westover as one of my choices.

Tara Westover grew up in rural Idaho under the heel of a domineering authoritarian father.  Her family were fundamentalist Mormons, who strictly adhered to the belief that the father was the ruler of the family, and Tara’s father enforced that rule, even though he was bi-polar and a schizophrenic.

In today’s terms, he would might be referred to as a “Trumpian” or Qanon follower.  He represented everything that I have come to hate in America.  He was a devout libertarian and fundamentalist, who railed against and was deeply paranoid of:  “The Government”, Science, Public Education, and Medicine, all of which he believed were part of some giant secret conspiracy that was out to get him and his family.    As a survivalist, he forced the family to preserve and stockpile food, fuel, and other basic necessities, and each family member had to keep a “Head for the Hills” bag for their escape when the government came to get them.

Tara’s father forbade doctors and hospitals, making the family depend on the herbs that her mother collected.  Throughout her childhood, Tara never saw a doctor or got a vaccination, fearing they would rot out her body.  However whenever an extreme accident occurred, like when her brother got a hole in his skull as a result of being forced to work in the very unsafe conditions of the father’s junkyard, exceptions where made and he was whisked to a hospital to save his life, but then, as quickly as possible, retrieved back to the family home to be “medicated” and “saved” by herbs.

Unlike her older brothers who had gone to public school, Tara was “home schooled” but while she learned to read and do basic math, she had very little knowledge of things other than the Book of Mormon and the conspiracy rants of her father.   Tyler, an older brother who had attended school, broke loose from the family to pursue more education and he planted a seed in Tara’s mind that her life could be better with more education in the outside world.

Such aspirations, of course, were totally rejected by her tyrannical father and Shawn her oldest brother, who would constantly verbally abuse her.  Shawn was sadistic and controlling, physically hurting Tara, and even forcing her head into the toilet to teach her who was boss.

Tara studied secretly in hopes of passing the test that would allow her to go to Brigham Young, the Mormon University.  With the help of her educated brother Tyler, who had “escaped” from the family, she passed the test and at the age of 17 entered university, having never even been to high school, a fact that had to be kept secret. As a university student, Tara stepped into a classroom for the first time in her life.

At University, everything was new to her and most of it appalled her.  She was shocked at the way the female students dressed and did “ungodly” things like study on a Sunday or drink a Coke on the Sabbath.  Tara had many gaps in her education and she made a fool of herself in one of her university classes by asking the professor what the “Holocaust” meant.  Through raw determination Tara slowly began to get up to speed in her studies and even began to excel in them.

Tara’s life began a rift in her family.  Each time she returned home, her father tried to erase her new found university status by forcing Tara to work in his unsafe junkyard, doing dangerous things.  Her brother Shawn continued to threaten and degrade her, calling her “whore” and racial epithets when her face was dirty from junkyard work.  This treatment really began to upset her, now that she was beginning to be aware of the history of racial discrimination.

Tara’s rise into the academic world was amazing.  With the help of grants and scholarships, something which, at the beginning, morally bothered her, she got a BA in History at Brigham Young University, then got a Gates Scholarship to Cambridge, after which she became a visiting Fellow at Harvard, before finally returning to Cambridge where she earned a PhD in History.

Things were never smooth sailing for Tara.  Every time she visited her family, they increased pressure on her to stay home, and tried to make her feel guilty for leaving, but it was not the life she wanted.  Eventually when she tried to get her father to do something about Shawn’s abusive behavior, her family turned on her, accused her of being the problem, and she was kicked out of the family.  It was traumatizing for her, but with the help of her new university friends and her determination to follow her own dreams, she finally accepted living her life without her family.

Educated was an amazing true story of personal will over family pressure.  Tara’s struggle and determination for independence was an inspiration to read.