Drama in the Old Well House 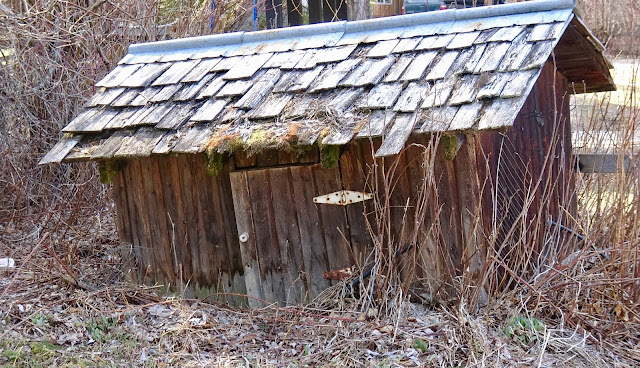 The photo shows our old well house which is now unused and slowly sinking into the ground.  This well house was the scene of a incident back in August of 1979 that could have turned out really badly.

My wife had signed on to a female cone-picking crew (forestry used to hire people to pick “pinecones” off of healthy superior trees that were felled for that purpose.  They would pick off the cones from the trees, gathering them, so that they could be used as seeds to grow seedlings that would be planted in areas that were logged.  It was boring and sticky work, but it was a way for a lot of poor back-to-the-landers to earn money.)

Anyway, my wife was away for two weeks cone-picking in MacKenzie, so I was holding down the fort alone in McBride.

One day when I turned on our tap, there was no water.  At the time we got our water from a well.  The well was about 15 feet (4.5 m) deep and the well house sat over it.  I went out to the well house to see what the problem was.  I crawled through the tiny door and when I was inside and started positioning myself in the tiny space, part of the floor collapsed and fell into the well.

I grabbed the edge of the door frame with one hand to keep myself from falling into the well, and with the other hand, grabbed onto the water pump to keep it from sliding into the well.  With some struggling I managed to extricate from inside the well house, by squirming through the door, all the while keeping a strong grip with one hand on the door frame and firmly holding the water pump with the other.

Once outside I was able to pull the pump out, along with its plastic intake pipe trailing behind.

Now that I think back on it, things could have been terrifyingly different had I fallen into the well without anyone knowing about it and my wife away for two weeks.  Fortunately, the drama ended with a benignly.  In the following days I rebuilt the floor of the well house, re-established the water pump, and put things back to normal.  The incident was forgotten until the other day when I read about it in my diary.